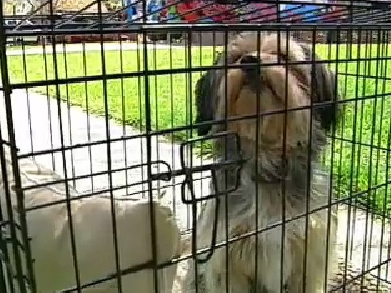 Topeka, Kansas resident Mark Harrison is being hailed a hero after saving a family pet from a house fire.

Harrison and his family were driving home from church on Easter Sunday when they noticed smoke coming from a home located at 3913 SW 39th St.  Harrison stopped his car while his children called 911.  Sensing imminent danger, Harrison did not wait the few minutes that it took for firefighters to arrive. Instead, he broke into the burning building and conducted a quick search for survivors. “I felt the glass and noticed the glass was hot…that’s the reason I went around to the back…just to see if there was something we could do.”

While no humans were home at the time of the blaze, there was a dog alone in the house. Harrison located it and quickly moved the frightened dog outside to safety, secured in its crate. He can be seen in a brief interview in the raw video footage included below.

The cause of the blaze is still under investigation.