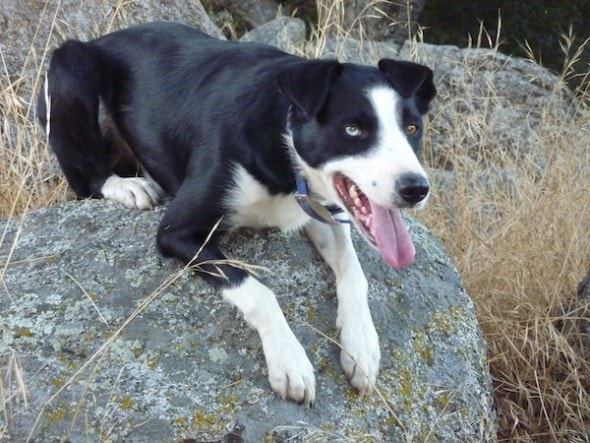 BoingBoing.net contributor Xeni Jardin tells the story of meeting Cow Dog and his human.  A touching story of a homeless man and his dog, and the good Samaritan that took the time to get to know them, and learned quite a lot.

An older homeless man and his black and white border collie have been calling a street corner near my home their home for the past few months.

I wanted to give away a doggie bed too big for my small dog, and the thought occurred to offer it to them. I walk over, say hi. The dog licks my hand, barks, wags. Border collies are super smart dogs, full of energy and purpose. This one, bigtime. He knows his job, and part of his job is to protect his owner. Another part of his job is to lick anyone’s hand who seems chill.

The man says yes, and thanks, and accepts the dog bed. We’ll call him Robert, for this blog post.

The dog sniffs the floofy grey plush cube, wags, probably recognizes my pup’s smell from it, and seems super stoked. He sits right down on it.

Another neighbor nearby lets Robert store some belongings in part of a shed. Probably the largest item is a bulk sized bag of food. The neighbor allows Robert to use their address for disability checks, so the homeless man can receive his benefits from the government. No address, no benefits. A catch-22 that throws many people on the street further downward.

“They’re even gonna bring me a Thanksgiving plate,” says Robert of our neighbors.

The dog is Cow Dog. Big shaggy elegant muscular black and white dog. So stately, even though he lives on the street with his human and hasn’t had a bath in a while. Cow Dog is obviously loved, and an intelligent, fast-moving and fast-thinking being. He just carries himself and looks you in the eye in a way that says: I am an extraordinary dog. Because that’s what he is.

“I don’t go anywhere without him,” Robert says.

We get to talking. Robert’s from Wyoming. So’s Cow Dog, who’s 12 and a half. Robert’s had him since he was weeks old, and now the dog is an elder, too. I don’t ask Robert’s age, or if he’s a veteran, or why he’s here. Some of those answers are apparent. None of them are my business. I listen to what Robert wants to tell me.

They had a trailer. Worked the ranches. They really were, and are, a working team. Itinerant cowboy and Cow Dog, working cattle. Going where the work is. Living where you work, in the kind of homes that cattle workers tend to live in out there in Wyoming.

A cowboy’s home is somewhere between temporary and permanent. It’s pretty much always rustic and stark, and not in the I-have-a-design-degree sense of those words. Because you’re always moving on without much notice, and you never earn or accumulate all that much of value.

The town they lived in was not far from Jackson Hole, 9,000 feet or so above sea level. The kind of place you might feel altitude sickness in, as your blood becomes starved of oxygen, trying to pump it in so much harder than it’s used to downhill.

Robert was acclimated to working hard at nine or ten thousand feet or more. But he developed problems breathing over the years. He now has advanced COPD. Smokers get that progressively worsening bronchial disease, but so do miners, factory workers, and people who work in dust, all day, every day, for most of their lives. Like Robert did.

So now they’re here, in Los Angeles. Homeless since 2011. Pretty hard for a man who can’t breathe well to work, even if he can find work.

Harder still, he explains: find a room that will allow Cow Dog.

Robert’s had a few opportunities to get paid housing with his disability benefits, he explains. There are homeless shelters nearby.

Just one catch. None of them take dogs.

“Nothing is going to separate me from Cow Dog. Nothing.”

His voice rises as he tells me how much he loves the dog. He’s animated now. The dog begins to bark, mirroring the flash of excitement. Tail wag.

I tell Robert I can relate, and I’ve been on ranches there, maybe one like he worked on, and I know and love the land and the life. I know loss, too. I lived and suffered on the street as a teen. And, yeah, man. Breast cancer. I know the loneliness of that disease, and others. I ended up adopting a dog that needed a forever home, during my recovery. My dog helps me get through whatever life brings. Mostly better things now. I’m alive today. I’m grateful.

Asking you to separate from Cow Dog is like asking someone to give up their family, their home, and their life-saving medication all at once, I tell Robert.

“Yes!” His eyes widen. “You understand.”

The next morning, I bring over coffee in a Mason jar, some strawberries, a slice of homemade bread. Soft things. Robert doesn’t have all his teeth anymore. How do you get dental care when you’re homeless? Even if it’s out there, finding it is all but impossible.

“He slept on it all night. When I was packing up my sleeping bag and my things, getting ready to move on, the bed was the last thing out. And Cow Dog looked up at me like, you’re not gonna leave that behind, are you? That’s my bed now.”

Cow Dog is sitting on the bed, eyeing Robert for any commands to come.

Robert says he worked as a beekeeper, too, over many years. “Once, I was stung 33 times all at once,” he tells me, pointing to the spots on his arms and neck where they attacked. “But I didn’t swell up, because I done it so long by then I was immune.”

I promise to put some honey in his coffee next time.

A neighbor’s “outdoor cat” strides over, right up to Cow Dog. He jumps up from his new bed, ready to corral something. The cat approaches. They’re nose to nose, now. They boop snoots. Cow Dog barks.

Robert gives the dog a stern “leave him alone.” Cow Dog looks up. The most human eyes.

“I can’t whistle. I was the only cowboy I knew who couldn’t whistle,” Robert says.

“When it come time to corral the cattle, all the other cowboys whistled at their dogs to tell them what to do, and each dog knew their owner’s voice. So I just said, ‘Cow Dawwwwwg,’ and pointed this way or that a way, and Cow Dog knew what to do.”

Robert has a plan, and wants a home where he can rest and take care of his dog. And himself.

I hope he gets there soon.

I tell him I’ll bring him food, and food for Cow Dog, when I can. He promises to return my little coffee jar.

“’This too shall pass,’ I always say about the hard stuff,” Robert tells me.

Right before they wheeled me in for my big cancer surgery, I tell Robert, a nurse leaned over and said the same thing to me, too.

This too shall pass.