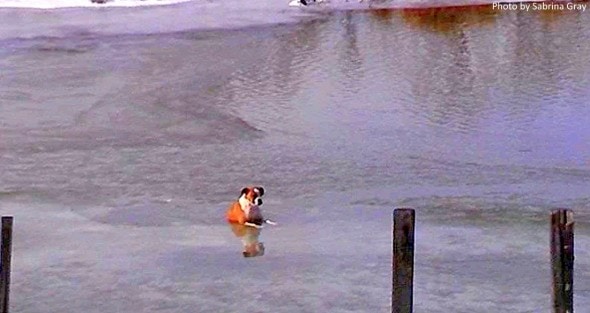 When Sabrina and Wesley Gray heard a dog in distress, they sprang into action. Sabrina was unable to rescue the boxer by boat due to thick ice, so her husband waded chest-deep into the water and brought the dog on shore, where it was warmed up and later reunited with its family.

Wesley and his wife were staying at his mother’s home in Gadsden, Alabama, enjoying the snowy weather. Wesley was out on his four-wheeler when Sabrina heard what she thought was a child’s screams.

“I thought somebody’s child had fallen into a pool or something,” she said.

What Sabrina heard was a dog falling into the icy water of the Coosa River. About 13 feet from shore was a boxer, trapped beneath the ice. She said its limbs were quickly growing numb from the cold.

“Another 10 minutes, and it probably would have drowned,” she said. 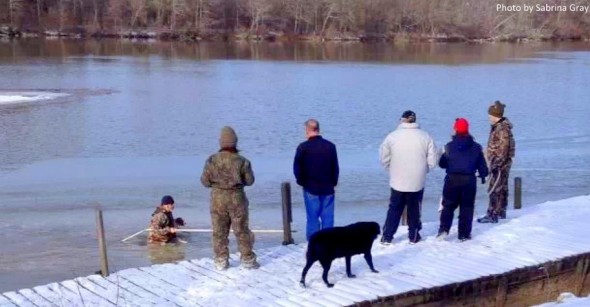 She first tried to rescue the dog by boat, but the ice between herself and the dog was about two inches thick, and she couldn’t make it. Wesley came up with another plan: he put on a pair of insulated rubber waders, which he knew would help protect him from the water, as long as he didn’t go in more than chest-high.

Wesley said it took several minutes to break the ice. People waited on shore with a rope, but they couldn’t get it around the dog.

“I’ve been in cold water before, and I set for that kind of water,” he said. “I had to take my gloves off, and I started not feeling my hands when I tried to grab the dog. My hands and arms were extremely cold. The dog was freaking out.”

Wesley didn’t feel scared, however, because of the number of people around to provide assistance. Back on shore, they draped a coat around the shivering dog and brought it and Wesley inside. Before long, the dog’s owner was reached using social media.

Sabrina wasn’t surprised that Wesley didn’t even hesitate to plunge himself into the dangerously cold water.

“We’re constantly finding dogs and trying to get them into homes,” she said. “Even if it’s random animals, we’re trying to do our best for them.”