Sometimes we catch stories right after they happen, but other times it can take awhile for news to make its rounds. This writer just stumbled upon an event that happened in Chicago on July 3rd, 2012 and wanted to share it with you fans (it’s been a slow news weekend). Though it could have been written in standard news article format, the story plays out better when told by someone who was there to experience it.

Written By Ed Kostro of Illinois

It was the morning of July 3rd and I had awakened extremely early this morning, sadly wondering how many lost dogs were already running the streets in sheer terror from all of the deafening fireworks that had been going off all around the city for several days now.  And I didn’t have to wait very long for the first phone call:

“Turn on your TV!  There’s a terrified little dog racing down the expressway in rush hour traffic!”

I immediately turned on my television, and I soon saw the heart-wrenching story now unfolding on the morning news:

“A small white dog was first spotted around 6:45 AM on one of Chicago’s busy expressways, and he’s still out there dodging traffic, and running for his life.  This dog has completely snarled rush hour traffic, and he has managed to avoid being cornered by the State Police and the Department of Transportation crews that have been attempting to corral him.  Our helicopter crew has been following this tiny orphan on his morning long odyssey, and he just ran up an entrance ramp to the expressway.  He has now exited the highway, and he’s now racing south down an extremely busy city street!”

I quickly realized that the street that this terrified little dog was now racing down was fairly close to my home so I immediately jumped in my truck to help in his rescue if I could.  And I quickly found many Good Samaritans already out on this busy street, already compassionately attempting to capture him before he was run down in traffic. 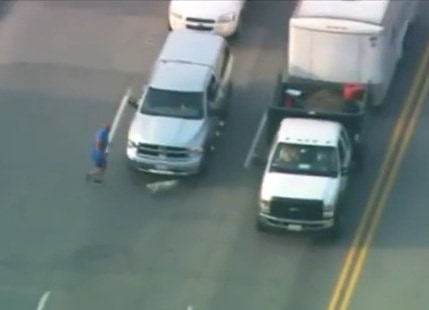 This poor dog had already run well over five miles in the terrible July heat and humidity, and he finally took some refuge in a patch of extremely high weeds adjacent to the street he was now racing down.

Several of us soon encircled this patch of high weeds and an extremely determined young man named Jose was eventually able to grab this now terrified, injured, and extremely dehydrated little dog.  As he held on to this little street waif, I managed to get a loop leash around his neck, and this poor lost dog’s terrifying ordeal was now finally over.

“What are you going to do with him now?” someone in the gathering crowd soon asked.  “This poor little guy’s paw is bleeding and he’s completely dehydrated, so I’m going to run him over to my veterinarian’s office to be checked out.”

And as I carried him back to my truck, I didn’t realize that several helicopters and reporters were now following us.  And very soon, the animal hospital where I took him was crammed with media personnel wanting to know the status of this rescued little street orphan.

Dr. Stan the veterinarian on duty who was now examining him soon answered all of their many questions:  “He’s got a cut on one of his paws and he’s very dehydrated, but otherwise this dog is in pretty good shape considering the ordeal that he just went through.” 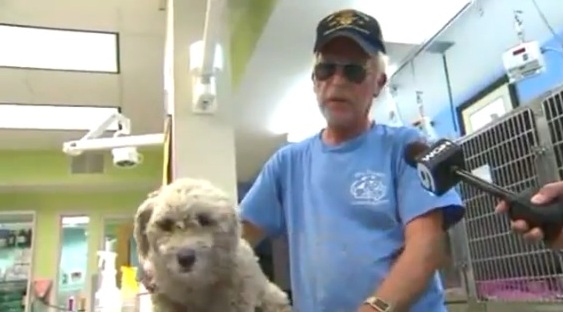 And when they asked me what I would name him I said:  “Rags.  This poor little guy is all beat up, and he just went through hell.”

We also soon sadly discovered that like so many street orphans that we find these days, little Rags had no collar, no tags, and no microchip.  And while Rags now spent the next several days in the animal hospital receiving the tender loving care that he needed, we soon received over 300 requests from people wanting to adopt him – just because they had seen him on television.  Many of them were calling and e-mailing us from all over the country, wanting us to put little Rags on an airplane and ship him to them.  “We really want this dog!  We saw him on the news!”

And now I found myself answering these numerous cross country adoption requests with the following:  “I would never ship a dog that I helped rescue to another part of the country to someone that I don’t know.  There are so many homeless dogs just like little Rags, all over the country right now – just about every animal shelter in the U.S. is overflowing with them.  Please visit your local shelter, and please adopt another homeless dog just like little Rags.”

So who eventually did adopt Little Rags The Expressway Dog?  To my immense delight, Dr. Stan the Veterinarian and his wife quickly fell in love with this little street orphan, and they soon decided to give little Rags the loving home that he and every other homeless dog in America today truly deserves.

Please Adopt – Don’t Shop – For Your Next Pet.

To see the amazing video, please visit HERE. It would not embed onto this page properly.