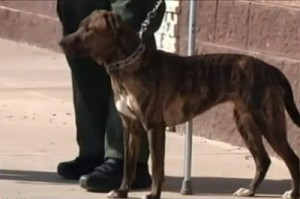 A troubling new report from Colorado includes video footage of an IRS office in Grand Junction flatly denying access to a man and his service dog.

News cameras were rolling when the Grand Junction IRS office blocked a handicapped man and his service dog from entering the building. John Wright made two attempts to pick up forms from the IRS with his service dog and was denied each time. The IRS claims they would’ve allowed Wright and his dog access during his first attempt if he had clearly divulged that it was a service dog.

On his second visit, he did. Footage shows Wright displaying a dog vest reading “service dog” for the security guard and IRS employees standing nearby, who still refused to let him in. While access guidelines do not call for dogs to be marked, Wright had already disclosed the K9 vest.

Wright called police out of desperation, and was eventually permitted to enter the IRS office and pick up his tax forms. “They think they can stomp all over disabled people’s rights… but they expect everybody to follow all of their laws and regulations,” says Wright.

The American Disabilities Act requires businesses to allow easy access to handicapped customers and their dogs, without the need to show identification or proof of status.