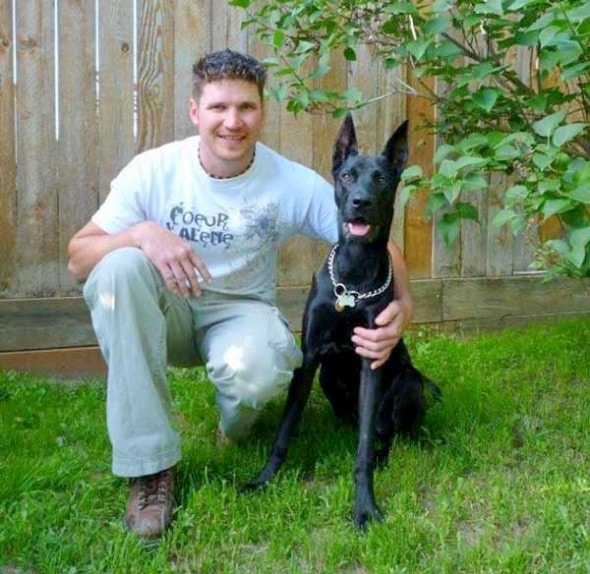 A man injured when a suspected drunk driver plowed into his home received some good news three days after his dog went missing from the scene: the Great Dane followed him and had been waiting for him at the hospital.

Jeffrey Groat was playing cards on Thursday with friend Sherri Bloom and her 10-year-old daughter in his Coeur d’Alene, Idaho home when Thomas Scott Heinbaugh drove his truck through the side of the house.

Groat and the others were hospitalized for their injuries, and Burke the Great Dane fled through the gaping hole, and went missing for the next three days.

A resident read about the accident in the paper on and recognized Burke’s photo. He had spotted the dog on Thursday near the emergency entrance of Kootenai Health and brought him home. Now he knew whose dog he was.

“[Burke’s] been hanging out in the guy’s living room,” said family friend Brandi Bieber. “They picked him up Thursday night near the emergency room. We think maybe the dog followed the ambulance and sounds of the sirens.”

While recovering in the hospital with a broken collarbone, shoulder and cracked ribs, Groat repeatedly asked about Burke. When Bieber found out where the dog was, she picked him up and family and friends began planning on a surprise reunion.

“We kept it all very hush, hush. A nurse told Jeff she was taking him outside to get some fresh air,” she said. “They were really excited to see each other. Burke is younger and was really excited. We had to keep him from jumping on Jeff because he wanted to play.”

Heinbaugh was arrested on suspicion of drunken driving and fleeing an accident. Groat’s home was so badly damaged in the crash that it has been declared condemned. He will be released from the hospital soon, and is just happy to know that Burke is safe and sound.

“It was a big, big stress for him,” Bieber said. “The family is relieved. He is relieved.”

“It was unbelievable,” Groat said of his surprise reunion. “It made my day. I didn’t even feel my broken bones then.”