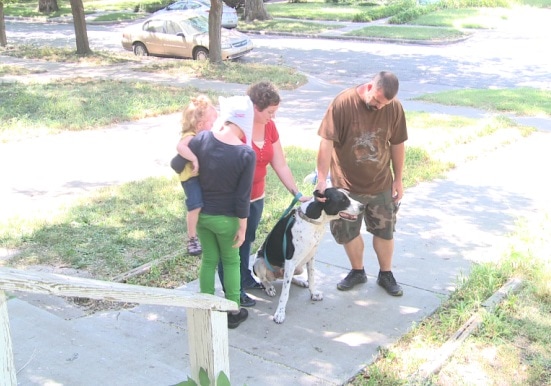 A dog in Kansas is being credited with helping to catch a man responsible for breaking into at least six cars in his neighborhood after he alerted his owner to the suspect early Tuesday morning.

Noah Stephenson was sound asleep on Tuesday morning when his Great Dane Marley started to bark. Stephenson immediately knew something was wrong.

“My dog was barking and he kind of has a special bark that he barks when people are around that aren’t supposed to, so we kind of knew that was the deal,” said Stephenson. “I looked out the window and we saw a guy kind of rummaging around out back with a flashlight.”

Stephenson went outside and came close to the man but the suspect ran from his backyard. Stephenson quickly called police who found the man just a couple blocks away and were able to arrest him. Wichita Police say the man is suspected of breaking into at least six cars in Stephenson’s neighborhood.

Stephenson’s neighbor Jessica Long was one of the victims of the break ins. She came outside on Tuesday she found her passenger window had been bashed in. When she went to report the crime to the police station she learned about the arrest and Marley and they were able to return her stolen items.

“Our amazing neighbor’s dog actually stopped the guy,” said Long. “It made it to where the cops could catch him and we could get our stuff back.”