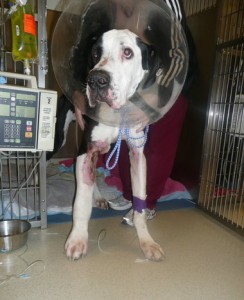 An Oregon dog missing for 16 days was rescued Friday after he was found trapped in a ravine near Vancouver Lake.

“His will to survive and the fact that he’s still alive, nobody can figure it out,” said Gary Walters. He and his wife, Amanda Giese, were looking after the dog when he bolted. “He lost a third of his body weight, at least.” Walters was dog-sitting Titan (his sister’s dog) when he let the dog out for a pee break on the evening of December 29. Titan was returning to the house when he noticed a car resembling that of his owner and gave chase, disappearing and prompting an intensive neighborhood-wide search that proved fruitless – until last Friday night.

Giese eventually located Titan in a muddy ravine near NW 122nd Street and Lakeshore Avenue in Felida. Despite the fact that Titan matched her body weight, Giese managed to drag the dog up a 50 foot embankment to safety. She took him to Dove Lewis Animal Hospital in Portland, where veterinarians noted substantial weight loss: the normally 185-pound dog had lost so much weight that he weighed only 100 pounds. He was treated for a serious infection and multiple minor injuries. 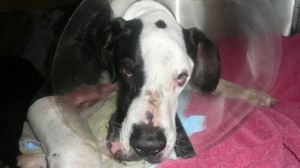 Titan’s owner Merri Walters broke down and expressed tremendous relief at his return, and offered Giese a $1000 reward, which was politely declined. Titan’s rescuer summed up the experience that has dog lovers across the nation celebrating in a brief, but telling statement: “The lesson I learned from all of this is to never give up. Keep looking. Do everything you can and keep the faith.”