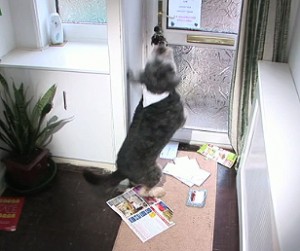 Five year old Bearded Collie cross Mable suffers from canine narcolepsy, a rare sleep disorder with limited treatment options. Triggered by excitement, her condition renders her unconscious for up to twenty seconds at a time.

Her owner, Trevor Gliddon, does his best to protect Mable by avoiding public situations that could trigger an episode, but some forms of excitement are unavoidable. “Mable does get excited when she meets other dogs because she’s so friendly. Then all of a sudden she’ll be out like a light. She’s only gone for a couple of seconds.”

While painless, Mabel’s narcolepsy is sometimes a source of confusion, leaving her disoriented. “From her point of view one moment they’re all on top of each other and the next the other dogs will be 20 meters away. This does tend to puzzle her as suddenly every one else has moved on. It’s like time travel to her.”

.
Rusty is the world’s most well known known narcoleptic dog. His clip from 2005 went viral, raising awareness of and interest in canine narcolepsy.

12 thoughts on “Narcoleptic Dog Passes Out at Sight of Postman”