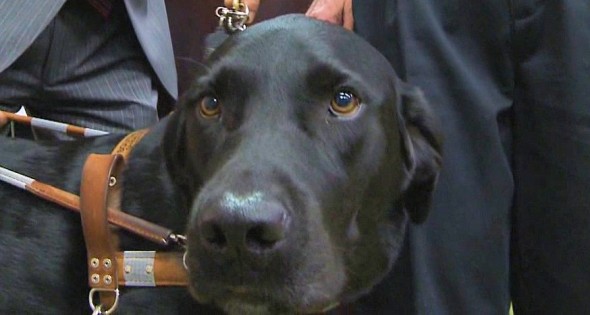 Earlier this week the mayor of Tallahassee presented a guide dog named Sherman with a Medal of Valor. In August, Robert Miller was clipped by a truck while trying to cross at an intersection. Sherman pulled the man to safety and saved his life.

Robert Miller is blind and Sherman is by his side to get him around. In August Sherman went above and beyond when Miller was clipped by an 18-wheel semi-truck as he tried to cross at an intersection. Sherman acted quickly and pulled the Miller safely out of the road.

“I’m just thankful his training was great and he was aware and alert enough to keep me from either being seriously injured or possibly killed,” said Miller.

In addition to recognizing “White Cane Safety Day”, the mayor also recognized Sherman for his heroic acts. Mayor Marks attached a Medal of Valor to Sherman’s collar and Sherman gave the mayor kisses in return.