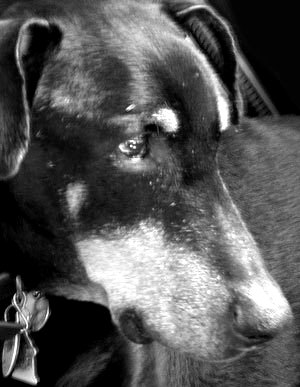 I just put my dog down.

When I returned home, alone, from the veterinarian, I found a small present waiting for me on the front porch. It was a dead white mouse with big round ears lying in small pool of blood. It had been killed but not mauled.

So far that morning I’d been playing it reasonably brave, but upon discovering the gift, I lost it. I started to sob. That dead mouse was the sweetest and most thoughtful gesture a grey striped cat has ever given me.

The multi-billion dollar dog care industry tends to focus their advertising on the cute puppy or the canine middle-aged best friend. They don’t tell you about living with an old dog. It’s not easy. It’s a lotta work. But I can now say I’m an expert in carpet care.

On the whole, I am not so fond of the human animal and I prefer to avoid them as much as I can. Other breeds are not as cruel, irrational or petty.

Needless to say, my dobie Din and I were close. For thirteen years, we’d been best pals. (Gunga) Din was handsome, spry and he walked with an elegant gait. His big floppy ears seemed to have a life of their own and I miss them the most. He was an Art Dog as I am an artist; the back of his head was usually stained with paint.

An old dog complicates your daily life and kills your social one. My last houseguest was nine months ago. When we rolled home, I was obviously pre-occupied as hands were flying. Maybe I should have better explained the situation to Din or given him more attention, but the dog got jealous and pondered his revenge. An hour later, happy as one can ever be, I danced out of the bedroom to mix more cocktails… there are some situations you just can’t play.

I haven’t slept well. For the last nine months, I have been harassed by a rather large rat. Around 3:30 every morning, this behemoth climbs inside the wall behind my headboard and into the attic, where it slaps on a pair of Army Boots. Then he does winds sprints for six to ten minutes. It jogs just long enough to wake-me-wide, a guarantee that I will miss the last train back to Slumberland.

Regardless, there is no point in going back to sleep because in a short while the dog will wake and the real tension begins. From 4:40 on, he will get up every fifteen minutes, hipbones creaking and collar tags tinkling, to stand next to my bed. He wants one of three things: 1) to check on me, 2) to be petted or 3) to be let outside for business. The first two are sweet; the third is a nightmare. Whereas some animals may bark their desire, mine chooses to communicate psychically. He’ll just stare at me, expressionless. It is very hard to interpret these subtle signals that can lead to very dire consequences.

Thus begins the pas de deux. I leap out of bed and open the front door. He snorts, laughs at me, and nine times out of ten, trots back into the bedroom. But as I have learned, you can never be too careful. Trust me, an animal accident on white carpet really does ruin your entire day.

When the rat started to invite friends over for early morning relay races, I took on the problem mano y mano. Spring traps and sticky glue trays were set and poisons placed. Until I caught a glimpse of it. The rat was no ten-pounder with mottled fur and a razor sharp sneer. In truth, my nemesis was a cute little white mouse with a long slender body and big round ears. My killing instinct vanished and the campaign to defend my household ended. Frankly, living with an elderly dog, I was grateful to get the early warning mouse call.

As we age, so must our expressions of love. In a dog’s hearty youth, you can slap ’em around and roughhouse with affection. But in their old age, when a dog is nothing but skin over old bones, you need to caress them gently. You have to be aware of tender spots and aching hips. Plus, if a dog is deaf like mine, it’s easy to scare them.

Not so long ago, I came home to find my old pal asleep on the porch. Glad to see him, I sat down on the stairs looking for a little sugar. I guess if I were deaf, sound asleep and someone tried to rub my ass, I would have done the same thing. My old pal whipped around with the speed of a teenager and snapped two big fangs into my palm. Not planning on pain, I flew toward the ceiling as the wild-eyed animal bit into an index finger. As I rolled past him, tumbling down the stairs, I could see that he was already feeling guilty. Ya can’t blame the dog. My knee is no longer black and blue and the scars are tattoos that I will always cherish.

Last fall, showing signs of senility, he suddenly refused to come into the house, even during the long rains and bad weather. I was insulted, hurt and put out. Actually, I was grateful and so was the carpet. I didn’t have to go to IKEA every other day. I had gotten tired of friends asking, “Have you tried doggie diapers?” To which I’d reply, “Who takes them off?” Then there were the sensitive friends with a loving point of view. “Sh** in the house?! Put the dog down!”

While Din was camping outdoors for three months, he made friends and created a little menagerie. There was the skanky squirrel with the threadbare tail and a wild cat with the sweetest little voice. The squirrel stayed aloof but the gray striped feline moved in, sleeping on the porch with the old dog. Everyone needs someone to kiss or hiss at. Then, suddenly last Christmas, Din decided to move back inside. The cat, his friend, hung around. And still does.

Knowing the dog would die at home, I had saved a fancy old bedspread, cardinal with embroidered gold detail, to be used as a shroud. The other morning, I draped the royal blanket over the seat of my truck and I carried my best pal to his berth. It was time. The question of ‘when’ had caused me much anxiety. What is too soon? Where is too late? The loving advice I was given proved correct, “You’ll just know.” I woke up that morning and I knew. The ride to the vet was a killer. Din rested his head on the center console and looked up at me with his big eyes and long lashes. I smiled because the perspective made his huge nose look even bigger.

Not wanting to slobber or linger, I had pre-paid over the phone. When I called, the vet said the place was empty. When I arrived, there were five busy puppies waiting for their first shots and five new owners who each got the ‘New Puppy’ speech. Life can stand still but Death has a schedule.
The wait in the lobby felt like an eternity. The stiff upper lip of my grief, a reservoir ready to breach the dam, began to stew and boil into anger. How long do I have to sit here? How dare you keep us waiting! Can’t you see I’m here to kill my dog, you motherf***ers? My nostrils were flaring and the upper lip was curling into a snarl. Damn, I don’t love often, but I love hard. As I slowly stood on shaky legs, ready to unleash my hounds of hell, a nurse appeared and said, “Mr. Grundy, we have a room for you.”

Over the last nine months, much to my surprise, a greater wisdom has been influencing my life. I have begun to see small details that evidence the connectedness and the eternity of all things.
I don’t believe in doggy heaven but I do know that when my dog was lonely, a cat came to befriend him. I do know that, in my despondency, the cat gutted the little white mouse that kept me awake and presented it on my doorstep as a gift.

“Gutted” is one essay of 38 in Gordy Grundy’s new book, “Artist’s Pants: The Humor and Angst of a Life in the Arts.” Click Here for more info.

Gordy Grundy is an American artist and arts writer. His visual and literary work can be found at www.GordyGrundy.com.

5 thoughts on “Gutted: A Story of a Good Old Dog”