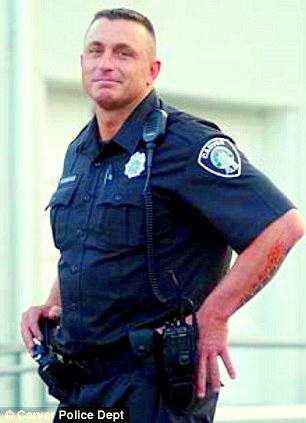 A Massachusetts police officer heroically dove into a murky lake to rescue a Chihuahua from eight feet below, in a completely sunken truck.  The little dog was not breathing, but after pulling him from the water, Officer David Harriman also revived him.

Debra Titus, 59, narrowly escaped with her own life when her pickup truck plunged into a lake on Saturday.  One dog, Stitch, was able to swim out with her, but her little Chihuahua, Moochie, was trapped.

She called the Carver Police Department and frantically waited, feeling totally helpless. The right officer responded to the call.  David Harriman is described as an “avid dog lover.”  He has an eight-month-old English bulldog named Jax and says he’d “do anything I could for him.”

“We showed up at the water and saw the vehicle was submerged,” Harriman told the Boston Herald.  “We were told a dog was still in it, so I did what I felt I should do – go in and get the dog.”

He quickly removed his gun belt and shoes and dove in.

“It definitely wasn’t easy.  I was able to get the door open and then go through some items in the back until I was able to find the dog.”

Moochie was unconscious, but was able to be revived by Harriman with just “a little squeeze.”

“He wasn’t moving at all when I first got to him, and then when I got him to the surface, he came to,” Harriman explained.  “He’d been under the water for quite some time.”

He had to get back to work almost as soon as he got out of the water, but the valiant officer returned later to check on Moochie.

“An hour later, when I went back to the scene, he looked like a little fluffball,” Harriman said.  “We’d all do it.  I know [dogs are] something that’s important to us.” 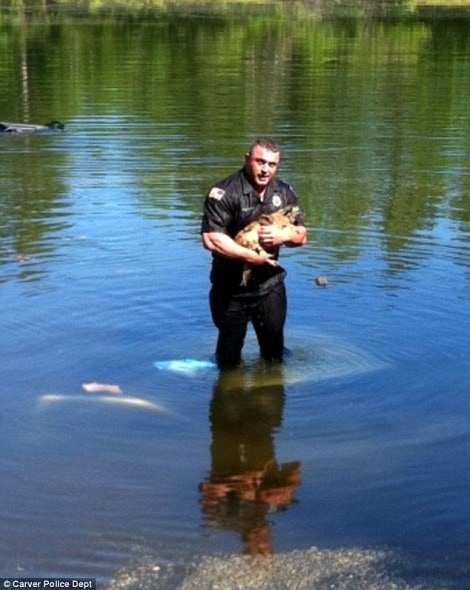