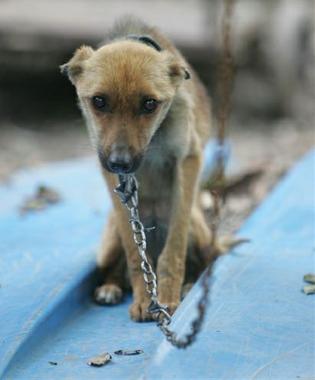 A regulation to ban dog tethering in the city of Hampton, Virginia was approved by the Hampton Council in a unanimous vote after an extensive public input and review process.

Opponents of tethering say that long-term chaining of animals can make pets aggressive and that some owners do not provide adequate water, food, shelter and enough room for dogs to move around. Some animal owners say it can be done safely and allows animals whose owners don’t have fences to spend time outside.

Regulations were first proposed in December that would have placed an 8-hour limit on tethering, but many residents argued that was too long. Council asked for more public input before making a decision.

The new proposal prohibits tethering between sunset and sunrise. In addition, animals can be tethered only if the owner is in the “immediate physical presence” or if the owner obtains a permit from the city. Before a permit will be issued, an animal control officer will visit the home to ensure the animal is licensed and has adequate food, water, shelter and room to move, and that proper equipment is used. A permit application fee of $25 will help defray the cost of the inspections.

If a dog is tethered after dark, animal control staff can immediately issue a summons. In the daytime, an animal chained without an owner present or without a permit could also draw an immediate summons. Violations would be punishable as a class 4 misdemeanor, with a fine of up to $250.

The new proposal addresses the main reason for the ordinance, said Gray, which is to ensure pets are not mistreated. In addition, he said, it allows responsible pet owners to tether responsibly, including those who work. The “immediate physical presence” answers concerns from pet owners who said they sometimes tether a dog while they are working or sitting in the yard in the pet’s presence.

Before proposing the new ordinance, Gray said, the Animal Advisory Board polled other localities. Both Norfolk and Virginia Beach adopted a 3-hour time limit; however, they both reported that it was extremely difficult to enforce because they had trouble proving in court that the animal was continuously chained for the time period.