Children are blessed with the ability to think outside of the box, and a young animal lover with an entrepreneurial spirit has found a unique way to benefit shelter animals. 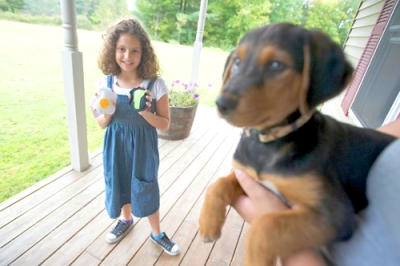 Since spring, 10-year-old Kyla Obenauer has been making dog toys by hand. She then sells them for a few dollars at the West Mountain Animal Hospital in Shaftsbury, Vermont. Each weekend Kyla’s parents take her to the vet to collect her earnings. From there, they visit the Second Chance Animal Center, where Kyla donates all proceeds from the week.

The Shaftsbury Elementary fifth grader was inspired after taking sewing lessons. “I made dog toys for my dogs one day, and they really liked to play with them, so then I just decided to sell them at West Mountain and then to donate money to Second Chance to help out all their animals there,” she said.

The young animal lover says she is hooked on giving. “I really love to sew, but I do like the idea of going to Second Chance and donating money to them,” Kyla said.

As one would expect, the shelter is greatly appreciative of Kyla’s commitment to the cause.

“We recognize the whole family when they come in. They are part of the Second Chance family, for sure, and we always look forward to seeing them come in — whether she’s bringing money from her proceeds and labor of love or they’re coming in to socialize with the cats,” said Michelle Rudd,  outreach coordinator for the Second Chance Animal Center.

Rudd is a big fan of Kyla’s work, and hopes others will follow her lead. “With that younger generation, it’s super inspiring because they’re the hopes of the future to kind of keep it going,” she said.