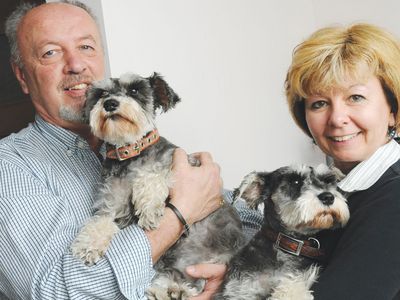 Life for Molly and Maggy is completely different than it was last March, when the two miniature schnauzer sisters were rescued from a puppy mill.

Gary and Zena Plummer said goodbye to their beloved miniature schnauzer Benji five years ago. It was a hard loss for them and they weren’t sure they could adopt another dog. Then last March the news broke of over 30 dogs being rescued from a puppy mill in Clarington, Ontario. The Plummer’s decided they should at least take a look at the rescued dogs.

When they arrived at the Humane Society of Durham Region to see the rescued dogs they met Molly and Maggy. When investigators had raided the puppy mill they had found Maggy and Molly huddled together in one of the cages. The Plummers still weren’t sure if they were ready for adoption, but agreed to take the two dogs home for a weekend and think it over.

“They were attached at the hip so we thought we’d take them both home and give them some fun for the weekend,” said Ms. Plummer. That weekend is still going over a year later.

Not only do Molly and Maggy have a new home they’ve made amazing progress. The dogs didn’t know how to be pets. Simple things like walking on a leash were foreign to them.

“When we first got them, they were afraid of their own shadows – all they would do was huddle in the corner and cuddle with each other,” said Gary Plummer, who now sees completely different dogs. “It’s just the difference between night and day. You would never know they were the same dogs.”

Maggy and Molly’s success story is what shelter staff and volunteers work for everyday. All of the dogs that were rescued from the puppy mill with Maggy and Molly have been adopted. The staff at Durham Humane Society continues to work hard to make more happy endings possible.