Many of you may know Harley the Chihuahua.  He was a spokesdog for the National Mill Dog Rescue, and was named as the American Humane Association’s 2015 American Hero Dog.  Now, even though he has passed, he has been entered into a contest to have his image put on a plane flown by Frontier Airlines.

Rudi and Dan Taylor of Berthoud, Colorado adopted Harley after he was rescued.  He was pretty much the definition of a special needs dog, having a fused spine, deformed legs and was missing his left eye.  After about five years, he became the official spokesdog for the National Mill Rescue.

The idea was to put a face to the organization, and what better face could one ask for than Harley’s.  Clearly having survived long odds, he would know better than anyone what the hell of a puppy mill is like.  Unfortunately, Harley passed last year, on March 20th.

However, in an effort to keep the legend that is Harley alive, his likeness is one that is in a contest, being help by Colorado’s Frontier Airlines.  If he gets enough votes, there will be a picture of him put on the tail of Frontier’s Airbus 320.  Not only that, but the National Mill Dog Rescue will get 20 round-trip tickets on the airlines, valued at $5,000 USD.

If you’d like to vote for Harley, you can do so on Frontier’s website, or you can just click here to be taken directly to the voting.  Let’s see if we can get him voted in, and get the rescue group he represented a much needed donation, so they can continue the amazing work that they do! 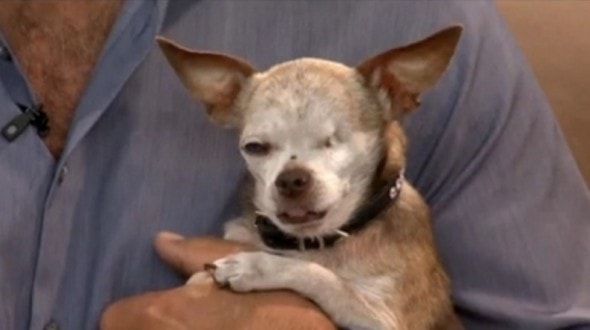