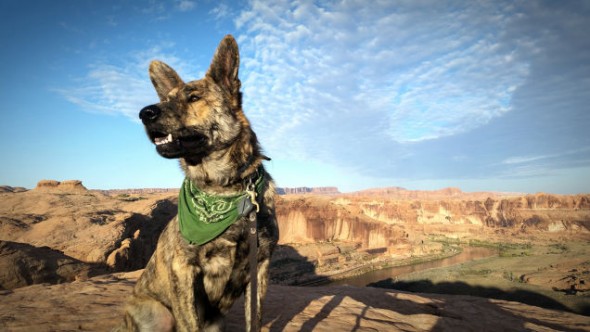 If you’ve been a fan of our website for a little while, you no doubt have seen the numerous stories out there where interactions between police officers and our pets have gone horribly wrong.  Officers shooting and pets making claims it was in the name of safety or self-preservation is something we see a lot of.

This editorial by Wes Siler for a blog he does on gizmodo.com tells of one man’s interaction with a police officer.  No one was hurt, but the story is a scary one, and becoming all too regular.  As pet lovers we need to take responsibility for our pets, but officers, not all but some, need to be trained better to handle other people’s dogs.  Hopefully, together we can make this sort of thing a thing of the past.

Out of the blue, a Ventura County Sheriff’s deputy approached my dog, drew his gun and threatened to shoot him while we were camping last night. One of the scariest, most upsetting and unnecessary things that’s happened to us, here’s how it went down.

A few friends and I decided to head up to one of our favorite biker bars, up in the mountains above Ojai for Iron and Resin’s regular Hooligan Hoedown campout. Reyes Creek Bar and Grill is located way off the beaten path in one of the remotest areas of Southern California and there’s an official state campground next door.

We’d enjoyed the barbecue and a few beers at the bar when, around 10pm, we decided to head back to our campsite for some peace and quiet. As we were leaving, we saw some Sheriff’s deputies hovering around the bar’s parking lot, but didn’t think anything of that.

My dog Wiley and Ty’s little buddy Sansho had been off-leash in the bar and its back yard all night, begging for scraps and generally being the sociable, well-behaved and much-loved dogs that they are. They weren’t the only dogs there, but were definitely the most gregarious; I don’t think anyone missed the opportunity to pet them.

As we left, I put Wiley on his leash, but I think Sansho was just following on Ty’s heels. Wiley stayed on his leash for the first hundred yards or so, then I let him off so he could chase his friend around as we walked the quarter mile or so back to our tents.

Reyes Creek is incredibly remote and also super dog friendly. Wiley’s a regular visitor, this is where he saw his first midget wrestling contest, first knife fight and first metal concert. Sansho once dug a hole so deep up on the hill behind the campground that Ty had to lift him out of it.

In all of our visits, we’ve never seen any cops. It’s just a small little bar and a campground way out in the middle of nowhere. I’d hazard a guess that they showed up this time to look in on events. While it was a “biker” camp out, these bikers were mostly 20 and 30 something creative living and working in Los Angeles, Ventura or surrounding areas. The weekend is a chance for them to let their hair down and wear their leather jackets, but it’s not exactly what anyone would consider a rough crowd. The event is advertised online.

The deputies must have seen us leave and followed us back to our tents. No sooner had we sat down and cracked a beer (totally legal), we saw flashlights approaching and, when they were 20 or 30 feet out, heard a man shout, “Who’s dogs are these? Get them under control or I’ll shoot them!”

Both Wiley (85lbs) and Sansho (75lbs) are big dogs and they do sometimes growl, bark or generally act like dogs do when a stranger approaches us in the middle of the night. Neither one is remotely aggressive or dangerous in appearance. Just a couple of fluffy house pets who are good with kids and other dogs and people in general. They did not act in an aggressive manner as the police approached and were not rough housing either; they were exhausted from being the centers of attention in a crowd all night.

Two cops, in uniform, were standing in the center of the campground’s drive, one had his weapon out of its holster, pointed at the dogs. Two other men, who we assumed to be cops were also present. They wore black jackets and were clearly with the police, but did not identify themselves as such. One remained behind the two uniformed deputies, hovering back in the shadows, while the other circled around our little campsite to approach it from the other side. The dogs were taking turns sniffing each other’s butts and peeing on a bush.

Ty and I stood up, hustled to cover the 20 or 30 foot gap between us and the cops and dogs. Ty was immediately able to grab Sansho, but Wiley heard the commotion and scooted around behind the cops before I was able to get my hands on him.

During the 10 or 15 seconds it took for me to grab Wiley’s collar and clip on his leash, the cop who hadn’t drawn his gun remarked loudly, “You do not appear to have control of your animals.” To me, that sounded like he was saying that as a precursor to shooting them or as a suggestion towards further action.

“He’s just a little puppy!” I responded. Wiley is 21 months old and, while a big dog, is still just a goofy, floppy little baby that cries in my arms when he gets scared.

The cop with the gun then approached me and explained in great detail how he was authorized to shoot any dogs he felt were a threat. “I can shoot any dog that approaches me,” he said holding his gun, in a gloating manner. “All I have to say is that I feel they’re a threat.”

I backed off the few steps back to the tents, then the probably-a-cop in black started kicking stuff in and around our chairs, telling us that it looked like were planning on having a fire, something that’s currently illegal in the area. I told him that wasn’t the case, but he didn’t look satisfied.

“How do you plan on securing these dogs tonight?” He asked Ty.

The cops said a few things amongst themselves, then walked away. That was that. There were several other dogs in the campground last night, some of which were also off-leash, but I heard no gun shots.

My friends and I were approached, with no warning or cause, by four cops in the middle of the night. Rather than warn us of their approach, they waited until they were within 20 or 30 feet of our campsite and next to our dogs before drawing a weapon and threatening the lives of our pets. At no point did they identify themselves as police. The dogs were not acting aggressively or even with energy, but an implied justification for violence on the cops’ part was issued as we were securing them. Once that had occurred, the deputies gloated verbally in their ability to kill animals on a whim, implied a threat, and then suggested we were trying to start an illegal fire, something for which they had no evidence.

These Ventura County Sheriff’s deputies weren’t acting in the public’s best interest, enforcing laws or ensuring anyone’s safety, they were acting like cowardly bullies, drawing a weapon with intent to fire it on unarmed civilians and their pets. Their manner of speech and the act itself felt incredibly adolescent, as if a scene out of high school. They wanted to show us their gun, show us they were in charge and revel in our submission.

The worst part? There was nothing I could do. I asked Ty if it was a good idea for me to go after them and get their badge numbers. He said sure, if I wanted to spend a night in jail. And he was right.

When I got home this morning, a buddy who’s a law student was hanging out in my living room. He asked if anyone had video, if anyone saw it happen or if I had written down their names or badge numbers. The answer to all that was no, so no, there’s nothing I can do. I guess that’s just how the police treat people in America.

IndefinitelyWild is a new publication about adventure travel in the outdoors, the vehicles and gear that get us there and the people we meet along the way. Follow us on Facebook, Twitter, and Instagram.