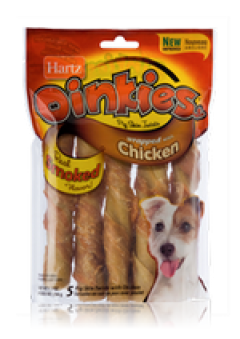 Del Monte and Nestle Purina recently pulled some of their dog treats off the shelves after they were found to contain illegal antibiotic residue, and now Hartz is the latest to follow suit.

Hartz Mountain manufactures Hartz Chicken Chews and Hartz Oinkies Pig Skin Twists Wrapped with Chicken.  Like the Milo’s Kitchen, Waggin’ Train and Canyon Creek Ranch treats, these chews are made in China, and have trace amounts of antibiotics that are used on chickens and are not legal in the US.

“Even though two-thirds of the treats we tested did not contain antibiotic residues, we would rather be overly cautious by voluntarily withdrawing these products from the market,” read part of the statement issued by Hartz.

“Upon learning about the nationwide voluntary withdrawal of several other brands of chicken jerky products through media reports, Hartz acted immediately to begin additional testing to determine if the same unapproved antibiotic residues were present in our products,” said Sean McNear , Senior Director of Regulatory Affairs and Quality Assurance at Hartz Mountain.

Since 2007, the Food and Drug Administration has received over 3,000 complaints of pet illnesses and death from tainted chicken jerky.  Despite the shocking number, the FDA has not been able to find any toxins or heavy metals to conclusively link deaths and illnesses to the treats.  However, they have issued three separate warnings to pet owners about the risks associated with foreign-made jerky strips.

Hartz claims the antibiotic residue found in their treats are “highly unlikely” to be linked to the chicken jerky being investigated by the FDA.

“The trace amounts of antibiotic residue do not pose a health or pet safety risk,” the company says.

But if there is no risk, why are these antibiotics illegal in the US, and why are they pulling the treats off the market?  Owners who have lost pets, particularly dogs, to suspicious illnesses after giving them chicken jerky, are not convinced of these companies’ innocence.  The public outcry for more stringent testing of dog treats is loud, but we need to be louder.  We need to write to pet treat companies and the FDA and not relent until genuine action is taken to ensure that anything consumed by our pets is manufactured safely.  Until then, it is recommended to make snacks at home.  Even chicken jerky that says “Made in the USA” cannot be completely trusted – it might only be the packaging that is made in the USA.