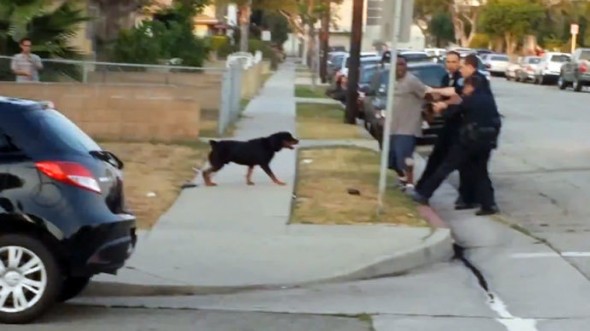 Police officers in Hawthorne, California have been subject to worldwide castigation following the shooting of an innocent dog, and are now receiving scores of threats that have lead to the removal of the officers in question from street duty.

This is a story that no one at Life With Dogs has wanted to touch – there are so many tragic cases of dog abuse and shootings by police, and we try to keep the heart-wrenching stories to a minimum. But there are cases where the public’s help is needed identifying an abuser, or where despite the horrific circumstances, it’s just something people need to be made aware of.

Last week police officers were captured on video shooting a non-vicious dog. They were arresting Leon Rosby, who they claim was disturbing a crime scene by videotaping their actions while blasting music from his car. Officers walked down the block to approach Rosby, who put his leashed Rottweiler, Max, into the vehicle, and turned around to be cuffed.

Understandably upset or confused by what was happening, Max jumped out of the window and ran over to his owner. Max did not violently lunge at the officers, but they shot him several times (this writer refuses to watch the video, so please excuse any errors). Also captured on video are the screams of horror by onlookers.

This is incident is one of many in a string of dog shootings by police. These animals are not attacking – many are simply friendly escape artists roaming their neighborhood, or even worse, as in the case of Maddie, just lying on their porch, wagging their tails.

For every feel-good story we read about an officer coming to the rescue of a dog, there are five shootings. What is going on with these trigger-happy police?? When humans are threatening or seem unstable, police don’t immediately shoot them. They give warnings and modify their own body language to try to put the person at ease. If it becomes necessary, a baton or taser is used; guns are a last resort. So why are our family pets routinely being blown away for trotting up to officers?

Mail carriers don’t carry guns on the job, and they come into far more contact with vicious dogs than police. They carry pepper spray, and the smart ones bring treats, knowing that a seemingly vicious dog is just being protective and needs a peace offering before allowing an intruder onto their property.

When it comes to officers conducting raids or protecting themselves from legitimate threats of attack, no one is questioning their right to protect themselves. But when there is plenty of time to saunter down the street to approach a man whose large dog is clearly in view, why were self-protective measures not taken instead of a “shoot first, think later” mentality? The officer who shot Max could have retreated, giving both himself and the dog a second to think about what might happen next. If Max attacked, the officer could have raised his knee into Max’s chest, stopping him and knocking the wind out of him, or a baton could have been used to stun him. Some officers have been known to use small fire extinguishers to stop an attacking dog.  But for a dog that is just curious and protective of his owner to be shot dead is unthinkable.

People around the world are horrified by the callous reaction of the shooting officer, and many have gone so far as to make threats against him and his colleagues. The police department issued a statement Wednesday, offering an apology for the shooting of Max. But most have not forgiven the blunder.

“Unfortunately, in the midst of this social media response, fallacies are being perpetuated and outright criminal threats are being made,” the police department wrote. “In the public forum of various websites, department employees have been misidentified as the officer who shot. This has led to criminal threats of harm directed not only at city employees, but also at similarly-named public citizens who just happen to live and work in our surrounding region.”

Facebook user Harmit Tamber had this as a reply: “You know you’re a disgrace when people would rather see your officers dead than an innocent dog. Find a hole, crawl in it.”

Computer-hacking activist group Anonymous had something to say, as well. They created a video on YouTube with a message for the Hawthorne Police, letting them know their actions were “unacceptable.” Though it is not clear that Anonymous was behind it, on Monday the department’s website had been hacked and was down for several days.

Due to the numerous threats, the officers involved in the shooting have been pulled from street duty. (We know what you’re thinking, the offending officer should be pulled permanently!) Rosby is appreciative for the support he has received, but the grieving man has asked that the threats against the officers’ families stop. He insisted that “not all police officers are bad.”

But we need to make good officers even better, especially with how they treat our animals. Some departments are now offering advanced training in how to deal with dogs and read their body language, which allows officers to better assess a genuine threat from posturing. But this is something that needs to be enforced in every department across the country. Surely, it could not take so much time and money that the taxpayers keeping these officers employed would not see it as a worthwhile investment. After all, if they are expected to know how to deal with adults, children, abuse victims, criminals, and all sorts of crazy situations while maintaining their composure, they should also be expected to know how to deal with the furry family members in 50 percent of American homes.