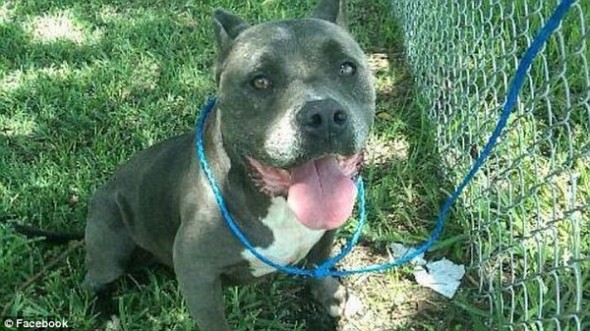 A dog found in Florida three years after he went missing is expected to be returned home to his owner in California thanks to the kindness of over two dozen volunteers who will be driving him the 2,500 miles home.

Eric Hough is a professional BMX rider living in Huntington Beach, California. He was the adoptive parent of a pit bull named Smoke and a Chihuahua mix. He had tried to rename him “Bayou,” but the name never really stuck, so most of the time he just called his buddy “Big Boy.” About four months after adopting him, Smoke disappeared.

A roommate of Hough’s was asked to move out, and on the day she left, Smoke vanished. She had bonded with him, and Hough believed she may have absconded with him. He called police, and kept an eye on the ex-roommate, even confronting her, but he never learned what happened to his dog.

“For whatever reason, that dog and me bonded real fast and it was our family. It was the little dog, the big dog and me, and it was a more well-rounded family, at that point,” Hough said. “Suddenly, I was just some guy with a Chihuahua.”

Three years passed, and in June, Smoke was found on a street in Cocoa, Florida. He was taken to a shelter, where it was determined that he had been microchipped. Hough had moved, and the two numbers listed no longer worked. But shelter staff refused to give up. Missing Pet Partnerships was contacted, and self-monikered “pet detective” Ryan Gamache joined in to help.

“I thought I’d try it out,” said Gamache, who saw a post about the dog on Facebook. “I love these impossible cases, so I spent a lot of time, a lot of emails, a lot of phone calls, trying to track down this person.”

He was finally able to find him on Facebook.

“When they started contacting me, it was through my sponsors and friends,” Hough said. “I’m, like, immediately thinking they’re trying to get information for identity theft.”

He was told that a man was trying to reach him about a missing dog. But his Chihuahua was safe at home, so he told him to leave him alone. Gamache asked him about a dog named Smoke, and the previous addresses, and it finally clicked. His dog had been missing so long that it seemed impossible that he’d be found.

“I was like, ‘Oh, wow. This is about me. Wait, is this about the pit bull?’ And it suddenly just came back. I was, like, two seconds away from losing the opportunity to ever get him back again,” he said, still in shock. “I was literally talking about him the night before. I probably talked about him every week.”

It was going to cost $2,500 to have Smoke sent back, but Heather McNally and Kindred Hearts, an organization that transports animals in need, volunteered to bring him home. Thirty drivers “totally from the kindness of their hearts,” stepped up.

“Almost every leg of the trip will be between 40 minutes and 90  minutes, allowing volunteers to drive the dog to and from destinations in a reasonable amount of time,” McNally said.

Drivers have been checking in and letting her know how Smoke is doing.

“He cuddles up and goes on the next route,” she said. “People from all over the country that I’ve never met are doing all the driving for him. It’s almost addicting. Once you do it once, you just want to do another. It feels so good to be able to help a dog.”

Gamache, who happened to be in California, cancelled his flight home to Seattle to drive part of the way.

“This is amazing how people have come together all the way across the United States, and I didn’t expect it to be like this,” he said. “It’s inspiring to watch. A lot of our cases don’t always have happy endings.”

Hough and Smoke are expected to finally be reunited tonight.

“I’m very thankful for the people helping,” Hough said. “It’s just amazing that we’re getting him back.”