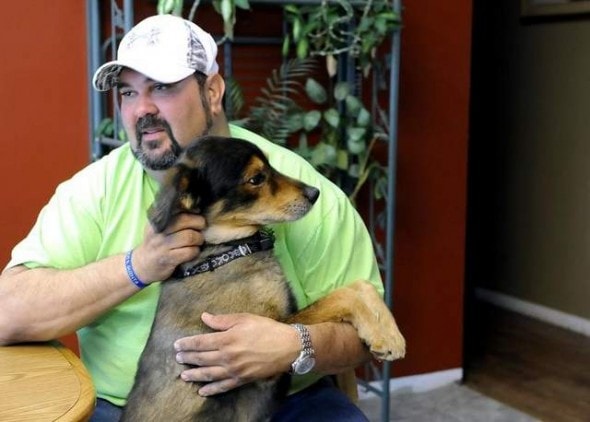 Joe Guinta found Hunter 11 years ago while watching deer from his truck parked at the side of the road.  The tiny husky/shepherd mix came out of the bushes, a 6 week old loving little fur ball.  Guinta went to every home in the area to return him, but instead wound up with a new pet.  They’ve been best friends ever since, but especially after the death of Guinta’s son Levi, 7 years ago.  Levi was killed in a head on collision at the age of 22, and Hunter was Guinta’s only solace.  “Being that Levi was my only child, he was all I had,” Guinta said. “Hunter and I are very close. We now call him Daddy’s Boy.”

Guinta took Hunter in for a haircut 6 weeks ago and noticed that he had lost weight, so went to the vet.  He was told that Hunter had a unrinary tract infection, but when the medicine didn’t seem to help he went back and found out that his baby had cancer.   He was diagnosed with T-cell lymphoma as well as a mass on his chest and has since gone through 2 rounds of the 16 chemo treatments that he needs and is already feeling much better.  “The turnaround has been remarkable,” Guinta said. “He is eating again and acting like a puppy. He is 150 percent better.”

However saving Hunter’s life comes with a bill that could be as high as $10,000 and Guinta is working hard to raise the funds to cover that cost.  Then he discovered the Magic Bullet Fund, applied for help, and was approved.  The fund was started by Laurie Kaplan who almost lost her dog, Bullet, to cancer and helps people raise money to pay for their dog’s treatments. Potential beneficiaries apply, and once approved, the campaign for the dog is announced on the MBF website and Facebook. A volunteer helps the family raise money, as well. The information is listed on the website for one month.

“In the seven years we’ve been around, we’ve been able to help 210 dogs,” Kaplan said. “We get requests to help between 40 to 50 dogs a year.”  There may be an element of karma at work here as Guinta has done plenty of fundraising on his own. Since his son’s death he has raised more than $20,000 for the Food Pantry of New York through annual golf tournaments that he has organized.

Now he needs help to save Hunter. “If I don’t get help, I will sell everything I have and go bankrupt in order to treat my dog,” Guinta said. “There is nothing more important than making sure he lives. I will do whatever I have to do.”  If you can help Guinta and Hunter, go to Magic Bullet Fund and donate to keep this wonderful pair together for a few more years.

1 thought on “He already lost a son, help him save his dog from cancer”