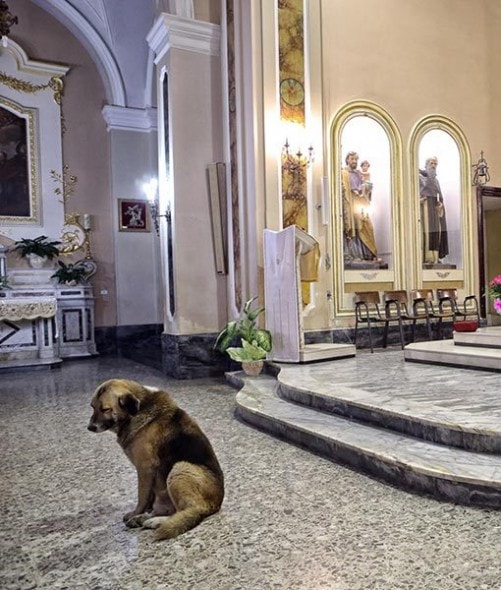 Every day when the bells ring out to mark the start of services at a church in Italy, Tommy is there. The German Shepherd used to attend mass with his owner Maria Margherita Lochi. Two months ago Lochi passed away and Tommy continues to attend mass without her, heartbroken and missing his companion.

Lochi adopted Tommy, a 7-year-old German Shepherd, when she found him abandoned in some fields close to her home. Lochi had rescued several strays over the years, but with Tommy she developed a very special bond. Every single day Lochi and Tommy would walk to church from their home and the priest would allow Tommy to come in and sit at her feet during services.

When 57-year-old Lochi passed away, Tommy was there with the mourners at her funeral service. He continues to mourn and attends services every day. “He’s there every time I celebrate Mass and is very well behaved,” said Father Donato Panna. “He’s still coming to Mass even after Maria’s funeral, he waits patiently by the side of the altar and just sits there quietly.” Panna, who recently lost his own dog, can’t bear to turn Tommy away.

Tommy has become part of the entire village’s family since Lochi’s passing. “Tommy’s been adopted by everyone in the village now and he is everybody’s friend,” said Panna. “Everyone looks out for him and leaves food for him – although it would be nice to find a proper home for him.”