A news helicopter captured footage of a firefighter rescuing a dog after it fell through thin ice at the Kendrick Reservoir in Lakewood Colorado yesterday afternoon.

West Metro Fire Rescue said the dog ran across the mostly frozen lake after spotting a coyote, according to the dog’s owner, who has not been identified. 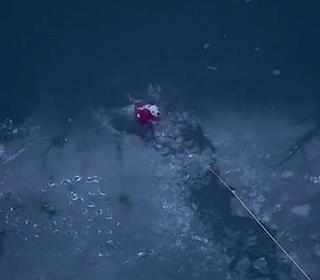 As the dog began to tire after treading water in a pool of open water surrounded by ice and snow, a SKY9 helicopter flew overhead and captured video footage of the rescue. Tethered by a rope, a diver from West Metro Fire made his way to the exhausted dog and helped it to regain footing. Firefighters returned the lucky dog to its owner shortly thereafter.

Unfortunately, the story does not end there. Max and his owner were interviewed on live television by 9News this morning. Anchor Kyle Dyer was bitten on the face by Max while bending over and petting him during the interview. The dog is being held under quarantine.

9News reports: “Doug Kelley, the director of Denver Animal Care and Control, says Max’s owner will be cited for three things: because the dog bit someone, for a leash-law violation because the owner did not have control of the dog at all times, and for not having Max vaccinated for rabies.”

See two new videos below. The bite footage does not show any blood or wounds, but is troubling nonetheless.