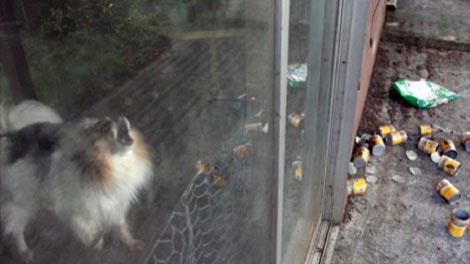 It’s been one of those weeks. There is another pending abandoned dog case that could use a little public outcry in order to convince local officials to step in. According to neighbors, a Shoreline, Washington woman left this dog behind two months ago. Conditions in the house are said to be atrocious. Animal control says they are staying on the case, yet they refuse to remove the dog, saying that it would amount to trespassing were they to seize it. A neighbor expresses dismay and concern in the following interview with King5 news. “It is just unbelievable the stench the poor dog lives in,” says Gerry Harris. Harris also says her neighbor hasn’t been home for almost two months, with Lucky locked in the basement the entire time. “There’s moldy feces all over the floor in there and he urinates in there, has no place to sleep,” says Harris.

I just got off the phone with King5 News, and the only update they have is that they have made calls to animal control and are waiting for a call back. I am not able to reach anyone myself despite numerous attempts. Note that many recent abandonment cases have gone unaddressed by local officials until public pressure has been applied. With that in mind, for the sake of this dog, please share. Lucky is counting on all of us.