As you celebrate Memorial Day, you can help an organization that benefits both rescued dogs and returning soldiers. Stiggy’s Dogs (www.stiggysdogs.org), based in Howell, Michigan, takes shelter/rescue dogs and trains them to be certified PTSD (Post Traumatic Stress Disorder) or TBI (Traumatic Brain Injury) service dogs. They are then paired with returning veterans who are suffering from the disorders as a result of their service in war.

Stiggy’s Dogs is currently in a contest ending on May 31 sponsored by the Home Depot Foundation (https://apronsinaction.homedepotfoundation.org/). They are the only organization in the contest that helps dogs and they are up against non-profits that dwarf them in size. While they are only run by 6 volunteers, their competition is comprised of organizations with 150+ employees!

One story that embodies what Stiggy’s Dogs does on a daily basis is that of Major, the Pit Bull mutt, and his partner, Marine Terrance McGlade: 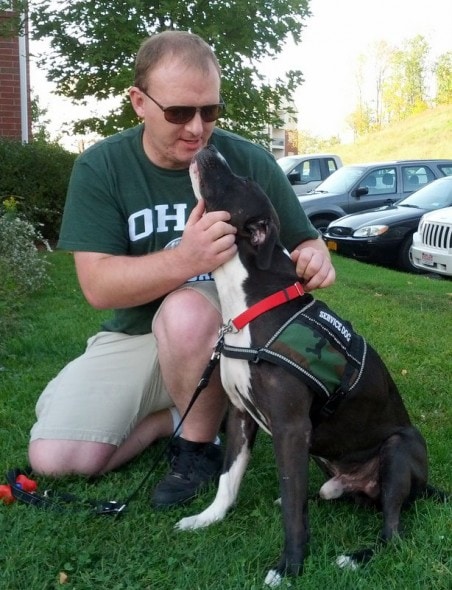 Major was rescued from a hoarding situation in Detroit, Michigan in 2011. He was then left waiting for an extended time, in limbo, as the rescue he was with folded. He was brought to Stiggy’s Dogs’ attention because of his unique qualities despite everything he had been through. He was so loving, so resilient, so intelligent and just willing to please. He only needed a little training so he could become a dog that could change a life.

Stiggy’s Dogs invested a lot of time in Major, giving him the proper training to get ready for his new life. Then it happened. Major met Marine Terrance McGlade. Terrance understood that Major and he were both on their way to a new beginning and a life together. Today, Terrance and Major are inseparable and Major is a fully certified PTSD service dog. With Major at his side, Terrance is attending college and pursuing dreams that once seemed out of reach due to his disorder. Terrance has told Stiggy’s Dogs many times that Major “saved his life.”

This story is a beautiful example of what Stiggy’s Dogs is all about. As you remember the sacrifices and commitment of those who are currently serving or have served in war, consider supporting an organization that works, not just on Memorial Day, but year round for veterans and for rescued dogs. You can vote for Stiggy’s Dogs at https://apronsinaction.homedepotfoundation.org/ . Even third place will give them a significant increase in funds, enabling them to rescue more dogs like Major and help a greater number of veterans.