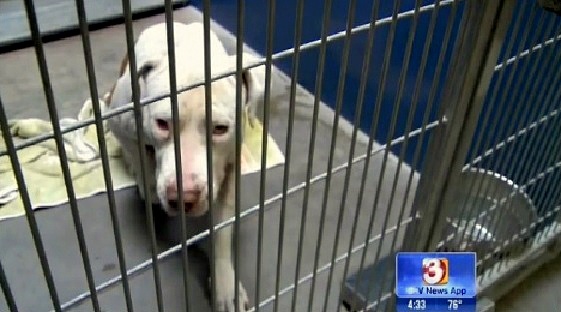 A neglected Phoenix dog called Mickey is waiting for the decision to be made on whether or not he will get the death sentence after a tragic accident wherein he bit a little boy’s face after the child went on his property and took a bone out of his mouth.  A group of supporters is asking for signatures and donations to help save his life.

Mickey was chewing on a bone on his own property when a four-year-old boy wandered away from his babysitter and over to the dog.  He attempted to pull the bone from Mickey’s mouth, and the dog bit him badly.

“The baby sitter who was caring for the child then picked the child up and brought him to an urgent care center,” said Dr. Jeffrey Salomone, the Maricopa County Medical Center’s trauma medical director.  “When he arrived he was in shock, had severe injuries to his face; a lot of skin and fat underneath the skin pulled back on half of his face.”

The boy also suffered from facial fractures, and plastic surgeons worked to repair the damage.

Mickey was surrendered by his owners, who have no desire to fight for his life, and placed on a 10-day quarantine while the city decides his fate.  What happened to the little boy was a terribly unfortunate accident, but this does not make him a vicious killer.
“I see this dog all the time while visiting my dog for biting someone,” said someone at Maricopa Animal Care and Control.  “Mickey seriously has been neglected. He’s so skinny you can see his bones sticking out. While all the other dogs are barking and going crazy he just sits there quiet and shaking.”

He needs to be trained to not be food aggressive, but considering whatever kind of neglect and possible abuse this dog endured, his reaction to having what may have been the only food he had been given in some time taken from him is understandable – he was scared because he didn’t know when his next meal was coming.

Mickey’s Facebook page has garnered close to 24,000 fans.  Supporters of him say their hearts go out to the boy, and many do not wish to see the blame placed on either party.  Mickey should not have to pay with his life for something that happened because he was mistreated.

The page has given updates on the case, but the outlook is grim:

“Over 40 people contacted the Lexus project BEGGING for their help. Currently and there are 8 donators and almost 1,000 supporters… All the attorneys are pro bono but there are still large court fees associated with any case. Every time papers get filed, it costs several hundred dollars. Right now, we don’t even have enough money for the TRO we desperately need to file to save his life. We appreciate the likes and sharing, but we need funds to do what needs to be done. There are almost 1,000 likes in an hour.  If everyone donated $10.00, we would probably have enough for this case and to help another TLP case as well.  We can’t do anything without the funds in place. Please make a donation to help us help Mickey.”

“I have been asked for an update, and the only information we have is not good. Today Maricopa County Animal Control officially stated they will not make Mickey available for adoption, or New Hope.  This means Mickey is scheduled to be executed at 5 am on March 3, 2014, after his 10 day hold is up.

“We want everyone to know and understand that our Local Counsel is working right now on pleadings to be filed with the Maricopa County Superior Court in order to try and stop Mickey’s Execution. We hope to have these pleadings filed by tomorrow.  Do not give up hope! We are doing everything we can to Save Mickey!  Please continue to spread the word about Mickey! We need as much public support as possible!”

With Mickey not being eligible to be ‘New Hoped,’ the group is worried that this is a definite death sentence.  But animal control said one of the options they are considering is selecting a rescue group or family to adopt Mickey, so long as a liability form is signed stating that they are aware of Mickey’s history and understand the risks involved.

“You look at him, and he sits in his kennel and he doesn’t look angry or aggressive at all.  He seems really, really mellow. It was just the circumstances of what happened,” said Melissa Gable with MCACC.  “It’s a really tough decision and it’s not something we want to make overnight, so we’re taking time to figure it out.”

The lawsuit and temporary restraining order for a stay of execution were filed this morning, and now supporters wait to hear the judge’s decision.

“We’re hoping the court will rule that he shouldn’t be euthanized, and from that point arranging for the dog to go to a group,” said The Lexus Project’s Richard Rosenthal.

0 thoughts on “Help Save Mickey – His Life Depends on Us”