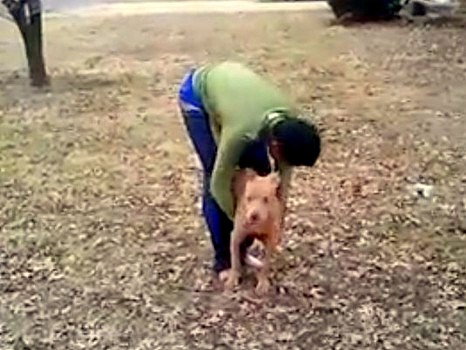 Two juveniles have been arrested for their participation in a video they made of one of them picking up a pit bull puppy and hurling it around.  Viewers across the country contacted the St. Louis County Police to report the video and see that action be taken.  The dog has been taken into custody and is now safe.

St. Louis County Police launched their investigation after receiving numerous calls about a video depicting animal abuse that was being shared all over Facebook.  The dog was picked up by its front legs and thrown into the air, and punched when it landed.

Redditors also posted alerts about the video, seeking to identify the boy throwing the dog.  A tip was given to police that the boy is a Riverview Gardens student.  School resource officers made the identification, and he and the boy filming and heard laughing were taken into custody.

The police made the following statement on their Facebook page:

“St. Louis County Police have arrested two juveniles who are being referred to the Family Court for the charge of Animal Abuse. This was an unfortunate incident and we would like to thank the citizens who brought it to the attention of law enforcement. The puppy involved in this unfortunate incident has been seized by animal control, and will be carefully examined and treated for any injuries by their staff. The County Police Department takes these incidents very seriously and we have a zero tolerance approach towards the inhumane treatment of animals.”

The distubing video, which we are assuming most people have no interest viewing, can be seen below.

28 thoughts on “Juveniles Arrested for Viral Video of Dog Abuse”