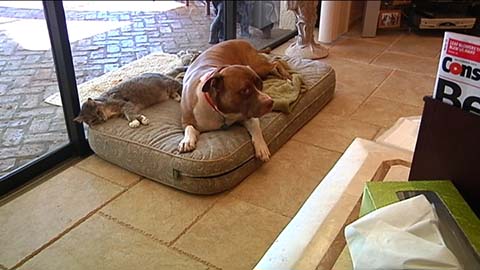 Sheree Lewis already knew she had a hero in her family, her son is deployed in Afghanistan and she is taking care of his dog Jack while he is gone. Then Lewis’ cat Kitty was taken by coyotes and Jack became a hero himself rushing to Kitty’s defense and saving her from the coyotes.

Lewis is taking care of Jack while her son Peter is deployed in Afghanistan. Jack quickly bonded with Lewis’ cat Kitty. That bond was stronger than anyone imagined.

The coyotes were shaking Kitty around but before they could cause any more harm Jack came running to the rescue. The dog sprinted towards the coyotes and defended Kitty, getting the coyotes to drop her.

“I didn’t know Jack could run that fast,” said Lewis.

Kitty was rushed to the vet, she had a broken tooth and is being treated for brain swelling. Kitty is still recovering, and Jack is by her side, keeping guard of his best friend.

“Jack is a hero,” said Lewis. “He saved the kitty’s life and he just shows how good dogs can be.”