A dog that fell through the ice at a treatment plant in Illinois had his life saved by his dog friend, who led people over to rescue him.

Two black Labs got in through an open gate at a water and sewage treatment facility in Andalusia around 10:30 AM on Thursday, likely chasing after geese and ducks.  One of them fell through some ice, and his buddy frantically circled the area, barking to alert someone that he needed help.

“I’d left for lunch,” said Joe Dungan. “I came back and when I came back from lunch the one black dog was running around and tried to get my attention. I looked over in this hole over here and the other dog was in the water trying to get out, so I called 911.” 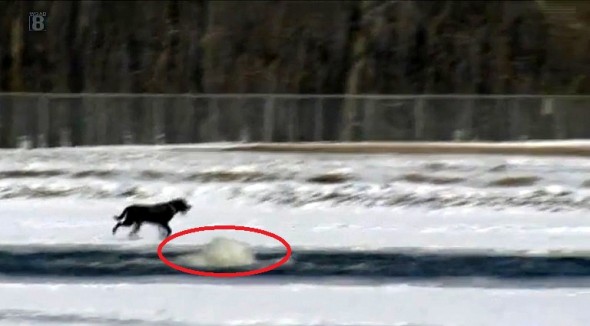 “I had just sat down for lunch when one of our guys, Joe Dungan, came back to the building and said he heard dogs barking and he looked around and one was in the water,” Matt Stark told ABC News. “The other was running around in circles in the ice trying to get to it and saying almost like, ‘Save my friend.’”

A rescue crew was sent out just before noon, but before they arrived, the plant workers got on the company’s flat-bottomed boat and pushed it out onto the ice.  They used a snare to capture the dog, whose name is Bucky, and pull him from the water.

“The dog had been there a long time. You could tell when we first got there it was howling like giving its last goodbyes or it was in pain, because we think it had been in the water about an hour. I told the guys we gotta hurry because the dog wasn’t holding its head up no more.” 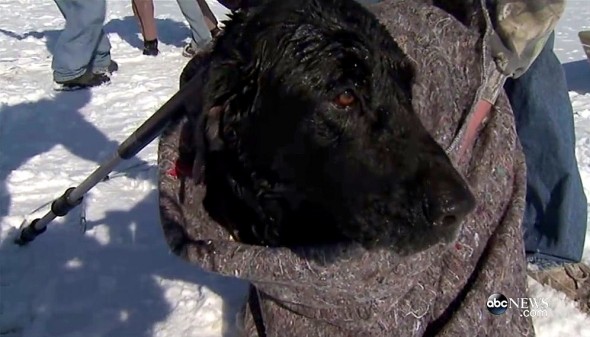 Bucky was bundled in a wool blanket and put in a company truck to keep warm.

“When I looked in the truck, it looked like it was glad to be there, but it was shaking pretty damn good,” Stark said.

Animal control arrived shortly afterwards, and the wet dog was taken to Rock Island County Animal Care and Control.   He wasn’t wearing a collar, but was soon reunited with his owner, Dusty Carlson, who explained that he some friends were out hunting with their dogs when the dogs got separated from them.

“It was the last day of goose season and we were kind of packing up stuff and they usually stay around and they were just gone,” said Dusty. “They never run away, so we just figured they’d be back soon, and then only one of them came back and we knew that something was wrong.” 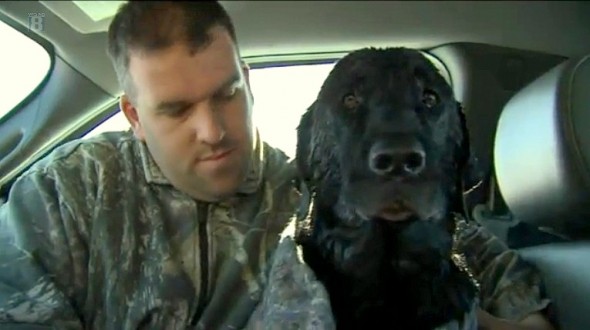 Max, the dog who alerted the plant workers, walked the five miles back to the hunters after Bucky was saved.

“Kolby put the picture out of Bucky, and Dustin was just sitting there at wit’s end, and I guess all these people started saying, ‘Hey, there’s a dog on TV that’s been rescued. It’s a lab,’” said Karla Reeder, mother of Dusty’s friend, Kolby. “So Kolby put two and two together, called Dustin, and said, ‘Hey, it’s over. We know where he’s at. He’s safe.’”

Learning that Bucky was safe and alive was an incredible relief.

“I was going to be torn up,” Dusty said. “Thank you to all the people who saved him. I owe them a ton. I really do.”

Bucky is tired and sore, but glad to be home.