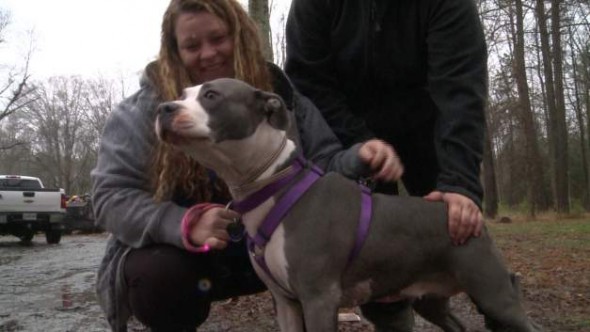 When a fire broke out in a Virginia home early Sunday morning the hero that saved all six people inside was a pit bull dog Sammie.

During the weekend’s winter storm Tina Sharpe’s family used their fireplace to help stay warm. Later on that night while everyone was asleep the chimney caught fire. Soon their home was filled with smoke and everyone was in serious danger.

The family may have continued to sleep if it wasn’t for Sammie, a rescued pit bull. Sammie began waking everyone up and alerting them to the fire.

“Sammie started jumping around on me, jumping on and off the bed,” said Sharpe.

Sharpe knew something was wrong because Sammie always sleeps soundly through the night. When she opened her eyes she realized her room was filled with smoke.

Sammie was able to wake up all six members of the Sharpe family and everyone made it safely out of the burning home.

“If it wasn’t for the dog, we’d be dead,” said Sharpe’s mother, Brenda, who owns the home.

The Sharpe family lost everything in the fire, but they have one thing to be thankful for, Sammie.