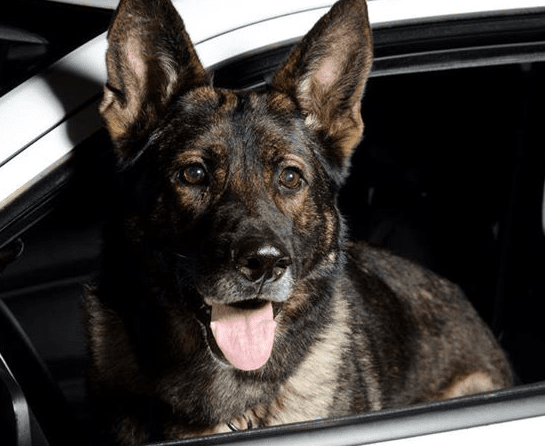 Anaheim Police K-9 Bruno is recovering after being shot last Thursday during a search with SWAT officers. His heroism saved the lives of several other officers and even after being shot by the suspect Bruno didn’t want to stop doing his job.

Bruno was assisting SWAT officers with a search when he found a gunman hiding near a trash can. The suspect, identified as 21-year-old Robert Moreno Jr., shot Bruno and fired at other officers before he was shot and killed.

Bruno was hit in the jaw and the bullet continued into his chest before it stopped just inches away from his heart. Despite this trauma Bruno didn’t let up on his duty. He only made a small whimper at his handler and then wanted to get right back to work.

“Even as his handler raced him to the hospital, Bruno’s ears were up and he didn’t want to lie down,” stated the Anaheim Police Department.

On Thursday night Bruno underwent surgery to remove part of his lung and reconstruct his jaw which was shattered by the bullet. His partner, Officer R.J. Young, stayed by Bruno’s side all of Thursday night. By Friday evening Bruno was showing progress and his vitals were stable.

Bruno’s heroic actions helped save the lives of three other officers according to Anaheim Police Department Lt. Tim Schmidt.

Donations to Bruno’s future medical expenses can be made through Friends of the Anaheim Police K9 Association.