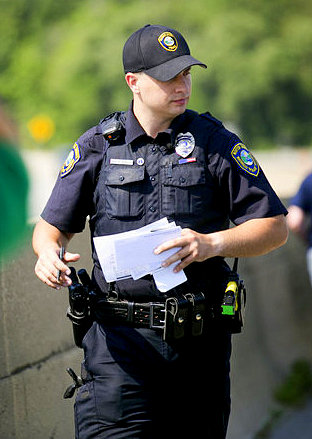 Michigan police officer Dan Hibler became a hero when he single-handedly pulled from an icy lake a golden lab mix who had been treading water for an hour. The dog was then wrapped in blankets and put in a toasty cruiser to recover until its owner was located.

Public safety officials in Norton Shores were called to respond to barking and whimpering sounds coming from the Mona Lake area. A dog had become trapped in the lethally frigid water about three feet from a dock, under a resident’s boat lift.

“The dog was clinging to a patch of ice. Only the head and the paws were out of the water,” Hibler’s report said.

The officer struggled to pull the water-logged dog out.

“I was able to reach the dog’s green collar with my fingertips after lying out on my stomach,” he said.  “After sliding the dog along the ice to the dock, I attempted to assist it onto the ice. The dog had no energy to help work its way out of the water. It was too heavy for me to simply lift out.”

Reaching into the bitterly cold water, Hibler pulled the dog out by its belly.

“The low lying dock allowed me to then roll away while holding onto the dog, lifting it out of the water and on top of me,” he said.

The officer then carried the dog to shore in his arms. Neighbors immediately rushed over with a jacket and blankets for the freezing pup. Another officer turned the heater up to warm the dog, and more officers brought blankets.

“Upon placing the dog into my cruiser’s backseat, it still had no energy to move,” he said.

No one at the scene recognized the dog, and a woman from Pound Buddies Animal Shelter & Adoption Center was called. She brought the dog to her home while neighbors tried to locate the dog’s owner.  It was wearing a green collar but no tags. 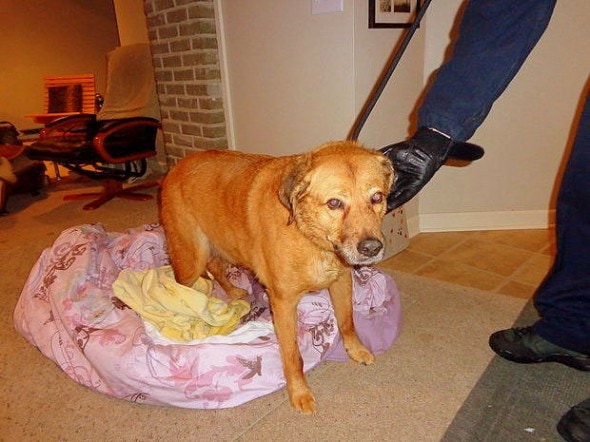 “The dog appeared to be well fed and old,” Hibler wrote.

An update on the Norton Shores Police Department’s Facebook page confirmed that the dog had a microchip, and had been returned to an undoubtedly anxious owner.

Fans of the page were quick to commend the officer’s heroic deed:

“Thank you, sir, for having a heart, for being brave, for being a policeman my children can admire.”

“Thank you Officer Dan Hibler. You risked your safety & health to save this suffering dog. Without you, the dog would surely be dead.”

“THANK YOU for rescuing this older dog, Officer Dan Hibler! We animal lovers are very grateful to you, and I bet your family is proud of you! ‘Every life counts!’”