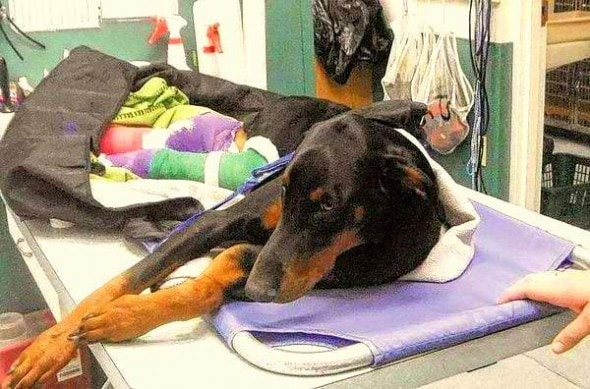 Six-month-old Atticus was bought from a breeder and abandoned when his owners moved.  He was then hit by a car and left for dead, but some kind-hearted neighbors rushed to his side and got him the help he needed.  Now they need some help paying for his medical bills, and possibly finding him a home.

Lisa Potts was in her Portsmouth, Ohio home when she heard what she believed was a child crying outside.  But when she went to investigate, what she found was a young Doberman in the middle of the busy street.

Two other neighbors were running toward him, stopping traffic to keep the dog from being hit again.  She had a neighbor keep an eye on her daughter while she went to assist the injured dog.

“There were semi-trucks everywhere. The three of us were in the highway, trying to stop traffic, but we weren’t thinking of that,” Lisa said. “We just knew we had to save the puppy, because if we didn’t, then he was going to be killed.”

Others were afraid to get to close to the dog, in case he bit them out of fear or pain.  But she soothingly reached out and comforted him.  The gentle beast responded by licking her outstretched hand.

“The young girl with me was crying and asked if he was my dog. I told her no, but said we couldn’t just leave him in the middle of the street,” Lisa recalled. “So, we all came together to get him to safety.”

Many neighbors flocked to help.  Maggie Clark brought a blanket to wrap Atticus in, and Marsha Justice brought a board to use as a stretcher.  Lisa’s husband Rick helped two men carry the poor dog into Marsha’s car, who then drove him to a vet.

The breeder of the dog was located, and he provided information on the owners, who were determined to have abandoned him.

“Obviously, you never want to hit an animal, but I don’t understand how anyone could hit an animal and not go back to see if it was okay and to check if they could help,” Lisa said. “That was a little discouraging, but then you have to think that two other people quickly responded, along with myself and then we had all of these other people, who didn’t know each other, coming together to do what we could to save this animal. It is heartwarming when a community pulls together like this.”

Though she was one of the first people to help Atticus, but says she couldn’t take much responsibility for his rescue.

“Honestly, my role was small,” she said. “It was Kim who is the hero, along with the other two I didn’t get names for.”

Animal rights advocate and dog rescuer Kim Bentley has taken over Atticus’ care, including overseeing his medical treatment, starting a fundraiser, and searching for a proper forever home.  She paid for his initial treatment at a local vet, and then took him 100 miles north to the VCA Mill Run Animal Hospital.

X-rays showed that both hind legs were severely fractured, and he has multiple fractures in his pelvis and a front paw.  Atticus has undergone one surgery and another is scheduled to take place tomorrow.

Kim started a fundraiser to help cover the medical bills.  The goal is $3,000, but an updated estimate puts the total expense at nearly $4,000.

“According to his doctor, the prognosis is good, barring any unseen complications. He is looking at a long recovery though,” Kim said. “There are so many people involved in this and I feel like I’m getting all of the credit. There are tons of people behind the scenes helping Atticus get better. I just want everyone to know I acknowledge all those who help and I’m passing along the good wishes that people give to me to all involved. I want people to know they count.”