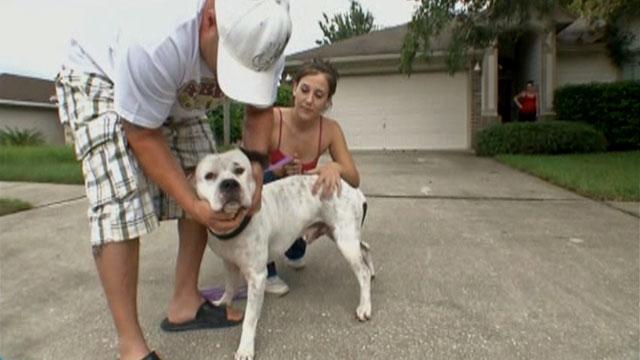 Thomas Tyson and Cynthia Taylor are alive today thanks to their dog Harley, who trusted his instincts and woke them up when fire struck their home.  In the early morning hours on September 11, the 4 year old American Bulldog insistently barked in response to the flames that were inches from the bed in which Tyson and Taylor were sleeping.  Since there was no smoke detector in the home, the couple would likely have perished were it not for Harley’s heroics.

“I just heard him barking,” Tyson said. “I wasn’t paying attention. I heard him barking and I wake up, and there’s flames kind of like it was on my side of the bed.”  Harley has been with Tyson for 4 years since being adopted from a kennel as a puppy.  He discovered him there with a bad case of worms and his ears has been chewed on by the other dogs, but Tyson fell in love with is sweet face and they have been together ever since.

The contents of the Orange Park, Florida home were destroyed in the fire, but Tyson’s sister, who was also staying in the house, also made it out safely.  Everyone is relieved and grateful that Harley was there to protect them, though firefighters warn that more than 50% of house fire fatalities occur in homes lacking a smoke detector.

Naturally Harley’s efforts will be rewarded, “He’s going to get a few steak dinners,” Tyson said. “I’m really happy he’s our dog and he saved our lives.”