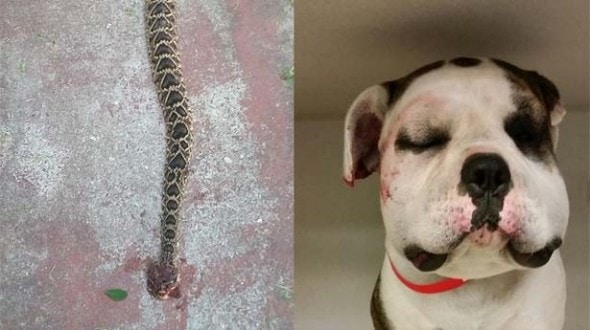 An American bulldog and her puppy in Lake Wales, Florida risked their lives to defend their family against a rattlesnake.  They were bitten in the process, but are now resting comfortably and recovering.

Unfortunately, a third dog involved did not survive the snake attack that took place near the front steps of the dog owner’s home.

Candy Sappington said her dogs, particularly Maisy, began barking furiously at the six-foot-two-inch diamondback rattlesnake as she walked out the front door and down the steps of the front porch.

“As I stepped down the first step, she came from behind me and kind of pushed me forward,” Sappington said.

She said her two puppies were also barking while, much to the shock of everyone involved, Maisy ran ahead of everyone and took a bite to the right ear from the venomous snake.  Puppies Tundra and Chubbs were also bitten.

“It’s hard to think she took the punch for me,” Sappington said.”

Sappington’s 16-year-old son grabbed a .22 caliber rifle and shot the snake, but not before it was able to sink its teeth into Chubbs, who was his dog.

“Chubs was the aggressor,” Sappington said.  “He always protected everybody.  He’d done what he had to do to protect me.”

As the dogs fought for their lives at a vet in Winter Haven, Sappington was in tears.  Not too many people, let alone dogs, make it through a vicious bite from a diamondback, which of all the snakes in the U.S., is one of the most deadly.

The family raced to find a vet that carries antivenin, but they could not find one in time to save Chubbs.  Maisy and Tundra were each given a dose of antivenin, which goes for around $700 per vial.  The high cost, according to one of the vets at the animal hospital, is why many vets don’t stock the stuff regularly.

“There’s not much that you won’t do for your kids and that’s how I feel (about the dogs),” Sappington said. “They saved me, now I’m going to do everything in my power to save them.”

According to a report made Friday, the swelling has gone down at the bite sites of the surviving dogs, but they are still not 100% in the clear just yet.

“All we can do is pray that the other two make it,” said Sappington.  “Everybody says I should feel lucky right now.  I don’t feel too lucky. I would have taken all three hits if I could.”