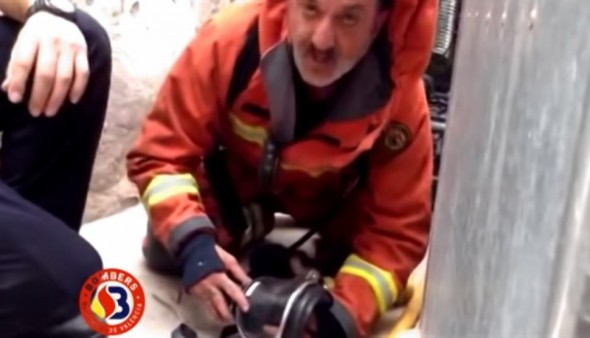 A firefighter in Spain, Jose Carlos Cortes, 42, is being called a hero after saving a two-month-old puppy that was found unconscious after being pulled from a house fire.  The Yorkie was found passed out from lack of oxygen, lying under a stairwell.

Upon noticing the dog, he quickly snatched it up, and got it out of the smoking building.  Immediately, he put an oxygen mask over the dog’s face, and began chest compressions.  At first, the pup didn’t respond.

At that point, Cortes pried the pup’s mouth open, and began mouth to mouth resuscitation.  It was still slow going however.

After five long minutes of tireless work, the puppy started to move its legs.  Thankfully, the dog showed some signs of life and was finally whisked off to a vet for proper treatment.

According to medical professional’s reports, that puppy was soon up and barking.  It seemed to really be in good spirits, and was even playing with volunteers at the animal hospital it was brought to.

One of Cortes’ colleagues had captured the frantic moments of him trying to breathe life back into the dog.  As soon as it was known the dog was going to be okay, the video was uploaded to YouTube.com, and the video has had over 30,000 views so far.

Cortes has been hailed as “Valencia’s True Hero” for his efforts.  One person commenting on the video said, “He is not a fireman, he’s an angel dressed up as a fireman.”