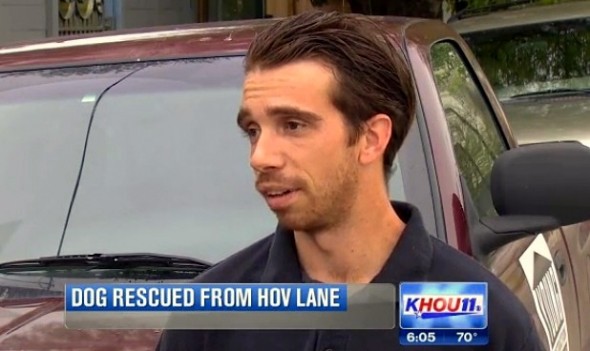 When Rickey Young heard on the radio that there was a dog in the HOV lane on a Houston highway, he rushed over to help.  Though the dog was frightened, Rickey gave up his lunch to lure her to safety.  She had broken bones and was bleeding internally, but this hero got her medical attention in time to save her life.

People spotted the yellow Lab just before 8:30 this morning in the HOV (high occupancy vehicle, or carpool) lane of the Eastex Freeway.  Animal control was called, but construction worker Rickey Young beat them to the scene.

He squatted down and patted the ground to show that he was no threat, but when he approached the dog she attempted to flee.  Rickey went back to his truck for the sandwich he planned to have for lunch.  She took the bait, and he carried her to the truck so he could take her to the Houston SPCA.

“I could see that she was thankful and she was happy to be in a safer environment,” Rickey said.

Her veterinarian said that she had broken bones and internal bleeding.  If no one had stopped to help, she likely would have died on the road.

Because she has no collar or microchip, it is believed that she does not have an owner.  But because of Rickey’s compassion and quick actions, she has a second chance at life.