It was an incredibly tense moment for people passing by an apartment building on the island of Tenerife; a dog that had nearly starved to death was precariously perched outside a window ledge.  Fearing that he might fall or jump, a group of youngsters held out a blanket to catch him.  Onlookers’ stomachs dropped as the dog plummeted two stories, but luckily he was caught!

Environmental police on Tenerife, one of the Spanish-owned Canary Islands, say the dog had been found in this deplorable condition in the Teide National Park by an animal lover.  She had taken him to her La Laguna apartment with plans to nourish his painfully emaciated body back to good health. 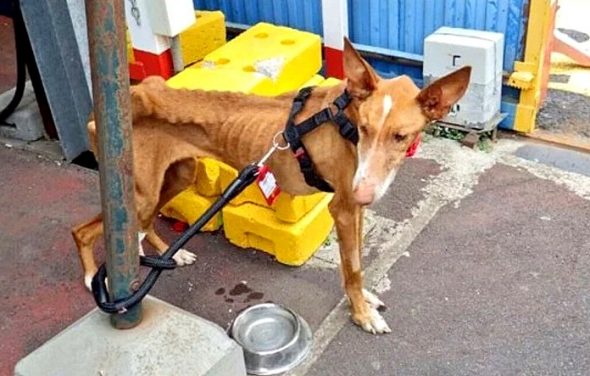 However, he somehow managed to find his way out of one of the second story windows.  He quickly realized that he was trapped, and began barking in distress until police were notified.  Several people gathered below and stretched out a blanket to catch him in case he fell, and to everyone’s horror, he did.

Miraculously, he landed right in the middle of the outstretched blanket.  Police took him to a veterinarian, who says that the dog should make a complete recovery.  Police have located his original owner and launched an investigation into how he became so severely starved.