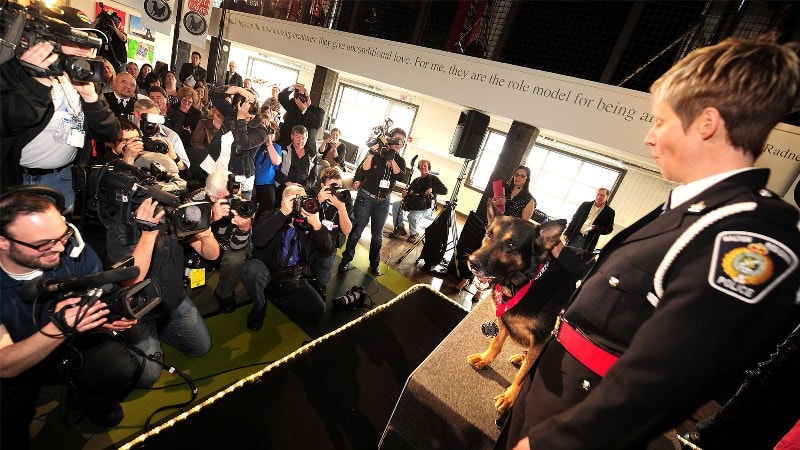 Fearless, devoted, and intuitive – words typically associated with heroic figures can also be used to describe the 2012 Purina Animal Hall of Fame Inductees – Nanook, Monty, Bree and Titan. Honored at PawsWay Pet Education Center in Toronto, these extraordinary animals have gone above and beyond to protect the lives of those around them, proving just how powerful the bond between animals and humans can be.

“Each year, we honor pet heroes and their life-saving acts. Our 2012 Inductees struck us not only by the intuitive sixth sense related to life-threatening medical conditions, but also their incredible persistence to act on that intuition,” said Mary Siemiesz, Executive Director of the Purina PetCare Legacy. “The Purina Animal Hall of Fame is at the heart of who we are as a company and we are incredibly privileged to celebrate these extraordinary heroes.”

Animals are gifted with an extraordinary sense of sight, smell, sound and touch. They also seem to have a sixth sense, or intuition, that allows them to pick up on illness and medical emergencies earlier than humans are capable of detecting. While researchers are at odds about this sixth sense, many argue that the stronger the bond between pet and owner, the more apt they are to notice changes in their smell, mannerisms and appearance. The 2012 Purina Animal Hall of Fame Inductees have shown this intuitive sense, ultimately preventing four horrible tragedies.

As one of the longest running pet recognition programs in Canada, the Purina Animal Hall of Fame has recognized the life-saving heroics of pets and service animals for more than four decades. Since its inception in 1968, 155 animals have been inducted – 128 dogs, 26 cats and one horse. Canadians across the country can visit www.purinahalloffame.ca to read past honored stories, and learn how to nominate a heroic pet or service animal.

The 2012 honorees were carefully selected from numerous nominations based on their intelligence, loyalty and intuition. “This year’s inductees prove that big heroics can often come in the smallest packages,” said Siemiesz. “They remind us of the important roles that animals play in our lives, and how far they will go to protect the people around them.”

“I was unaware that I had severe sleep apnea, but Bree sensed something was wrong with me immediately. Without her persistence to wake me from sleep apnea episodes, especially the severe episode last September, I wouldn’t be here today,” said Michele Gilks, owner of the two-year-old Dachshund from Blissfield, New Brunswick, and 2012 Inductee. “She is my personal hero, and we’re so thrilled that Bree is being recognized for her heroic efforts by the Purina Animal Hall of Fame.”


Nanook (St. Catharines, ON) Early one morning last May, at around 3 a.m., Nanook, a Siberian Husky cross began causing a commotion to wake her owner Coleen Kilby and her husband, Gord. Nanook was circling their bed, howling, licking her owners’ faces and barking loudly, which was very uncharacteristic of Nanook. When the sleeping pair woke, they couldn’t understand what was prompting Nanook’s erratic behavior. Coleen suddenly began feeling pressure in her chest as well as a gnawing pain in her arm and realized she was having a heart attack. Her husband called the paramedics and Coleen was immediately taken to the hospital for treatment. By 11 a.m. that morning, Coleen had undergone surgery to insert three stents in her heart. If it wasn’t for Nanook’s keen intuition and persistence that night, Coleen would have had the heart attack in her sleep and would not be here today.
Monty (Camrose, AB) In the middle of the night last March, Patricia Peter’s lovable, ginger tabby cat Monty woke her up by repeatedly biting the fingers of her left hand – the only hand she uses to test her blood sugar levels to monitor her newly-diagnosed diabetes. Although this was unusual behavior for Monty, Patricia tried to ignore it and “shoo” him away so she could go back to sleep.

When he persisted, Patricia sat up to push him to the foot of the bed and suddenly felt incredibly dizzy. She got up to go to the washroom and felt weak in the legs, couldn’t focus and felt sick to her stomach. With Monty meowing and rubbing up against her leg, Patricia slowly made her way to the kitchen to check her blood sugar. As she got closer, Monty intuitively ran ahead and sat beside her diabetic testing kit.

Sure enough, after testing her blood, Patricia discovered her blood sugar was down to a low of 2.7. Even after she treated the low blood sugar with sugar tablets, Monty was persistent in keeping her awake until she retested at normal sugar levels 15 minutes later. Patricia later told this story to her doctor who insisted that if Monty hadn’t woken her up and prompted her to test and treat her low blood sugar levels, she would have fallen into a diabetic coma or had a diabetic seizure.

Patricia always thought Monty was a smart cat, but she now also sees him as her lifesaver, “little hero” and guardian angel.

Bree (Blissfield, NB) Last September, three days before owner Michele Gilks’ 50th birthday, Bree, her two-year-old Dachshund, tried to wake Michele up in the middle of the night by putting her snout in Michele’s mouth, licking her face and frantically digging next to her. When Michele finally awoke, she felt an overwhelming “drowning” feeling and began gasping desperately for air.

Bree’s antics also woke Michele’s husband who called an ambulance at once. When the paramedics arrived, Michele was put on oxygen and rushed to the hospital due to her dangerously high blood pressure. At the emergency room, Michele was diagnosed with a severe case of sleep apnea – a potentially life-threatening condition that causes a person to stop breathing during sleep.

This wasn’t the first time Bree had woken Michele up from sleep in the middle of the night and now she understood why: Bree was helping Michele breathe whenever she stopped. If Bree hadn’t been watching over Michele that night, she would have died in her sleep from lack of oxygen. Today, Michele is receiving treatment for her sleep apnea and Bree no longer wakes her during the night. Michele feels like she’s been given another chance at life and she’s eternally grateful to Bree for that gift.


Service Dog of the Year: Titan (Oakville, ON) One stormy evening last October, Police Service Dog Titan and his partner Constable Tara McLorn set out during severe weather conditions to locate a despondent and desperate woman who fled into a wooded area after attempting to overdose on medication.

She had taken a large dose of pain medication, called 9-1-1 and told the operator that this would be her last night alive. Although her initial call for help allowed the team to narrow her whereabouts using cell phone triangulation technology, it was Titan’s fearless dedication and intuition which led the unit to her location, ultimately saving her life.

Defying hurricane-like winds, torrential rain and a race against the clock, Titan directed the team through the forest to the woman just as the drugs she had consumed were taking hold. The team remained with the woman until paramedics arrived to take her to the hospital where she was treated for hypothermia and a dangerous drug overdose.

There is no doubt from his police team that Titan is a hero. At a time when every second counted, Titan helped his team defy the odds, rescue the missing woman and save her life.