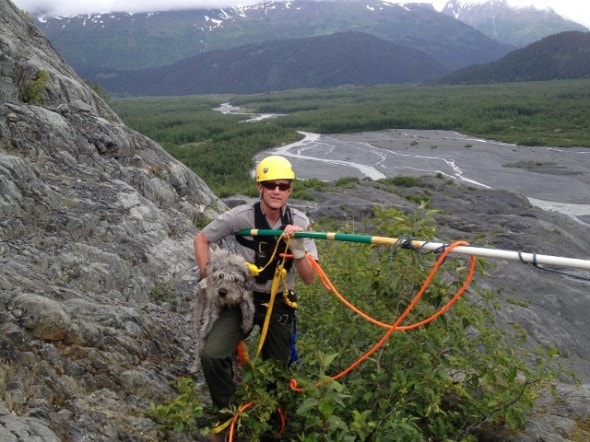 In Juneau, Alaska, at the Kenai Fjords National Park a ranger was able to rescue a frightened pooch that had been stuck on a high cliff ledge near Exit Glacier.  John Anderson was able to bring Sadie down from there in a backpack during the heroic rescue.

Reports of a dog wandering about on the glacier had come in late last week.  It had been spotted along the Resurrection River, close to Seward.  No one was able to actually locate a dog in the area, and it wasn’t for lack of trying.

Once Sadie had finally been located, the rescue team was called in and park ranger John Anderson was the hero the dangerous task of getting her down from there.  Lowered down to where she was, Anderson tried to coax Sadie to come to him, but the dog would not budge.  He finally managed to get a hand on Sadie, and get her into a backpack so the pair could be pulled back up, and off the dizzying heights of the cliff face.

Chief of interpretation for the park Kristy Sholly said no one knows just how long Sadie was stuck up there.  According to her information, Sadie was on a trial adoption when she got away from the people considering her as an addition to the family.  She had been roaming the park for a while it’s assumed.

Sadie is back at the shelter, and still searching for that loving forever home that every dog deserves.