A nine-year-old golden retriever became a hero for her family – including two very small children – when she took on a protective mama moose who charged at the campers while they were out for a walk.  Miraculously, she survived virtually unscathed.

Chelsea is as darling as they come, according to owner Ginger Wolfe.

“There’s not a mean bone in her body,” she said. “She’s just a sweetheart.”

But any dog who loves its family can show a very different side of its personality when faced with a threat that puts its pack in jeopardy.

Ginger and her boyfriend, Jeremiah McLaughlin were camping west of Boulder, Colorado with his mother, sister, and her two kids, aged two and four.  Ginger had to run to Boulder for an errand, and the rest of the group decided to go for a walk.

They were just 50 yards away from their site when Jeremiah realized he was dangerously close to a female moose with two calves.

“I’ve seen plenty of moose, and I knew it was going to be a bad situation,” he said. “She immediately lowered her head and came right after me.”

He darted behind a tree as she charged, but then she went for the rest of the family, who had been walking behind him.  Chelsea bravely took on the moose herself.

“The dog stayed between my mom, my little sister and the kids.  That dog didn’t hesitate one bit. She didn’t act like she was a day over two or three.  As soon as she saw that moose go after us, she went right after it and didn’t back down.”

The rest of the family was able to reach shelter, but Chelsea continued to fend off the mad mama, who started to headbutt and kick her.

“The moose tried to crush her, and lowered her head down onto her, and those two went at it for 15 or 30 seconds,” Jeremiah said. “I thought for sure the moose was going to kill that dog.” 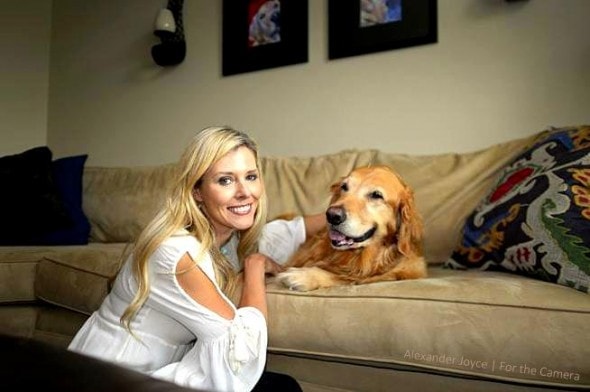 He had been carrying a stick intended to be used as a fire poker, and joined Chelsea’s side.  He struck the moose over the head with the stick, causing her to flee with her calves.

Chelsea could barely keep her eyes open and was immediately rushed to a vet, but it was feared that the damage was done.  Remarkably, she didn’t have a single broken bone, nor any head trauma or internal bleeding.  She merely sustained some swelling to her liver, throat, and legs, and will fully recover.

Moose are common in the region, and can become extremely aggressive if they feel their young are in danger.

“It’s definitely something that we see happen from time to time,” said Jennifer Churchill of Colorado Parks and Wildlife. “While they appear very docile, if they start walking toward you, they are probably attacking.”

What was more surprising was Chelsea’s fierce protection of people she had only just met.

“I was surprised, but I also know that she is very loyal,” Ginger said.  “I’m just so proud of her.”

“She had the bond and just jumped right in there, which was pretty amazing.  We are really grateful Chelsea was there to take some attention away so my mom and sister could get the kids hidden behind the trees,” Jeremiah concluded.