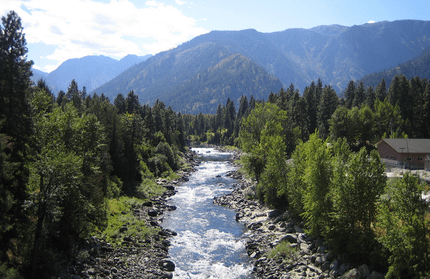 The Chelan County sheriff’s office is reporting that a 29-year-old woman hailing from Cashmere, Washington has drowned in an attempt to rescue her dog from the Wenatchee River.  The dog eventually was able to make it’s way to shore, and has survived.

At the public fishing area in Dryden, Washington, while there with a male friend, they are saying Sabra Crafton went in after her dog that was struggling to keep it’s head above water.  Soon, the male friend had to attempt a rescue of Crafton, when she started to struggle to do the same.  The pair were enjoying some time along the river, and tossing a stick out into the water for the dog to fetch.

It was a kayaker that had located Crafton’s body submerged near a bridge in Cashmere.  Rafters that were close by were able to pull her out of the water and on to shore, where they began CPR.  Minutes later, an ambulance showed up and EMTs attempted CPR for over 30 minutes, but with no success.

The dog was able to make it to the shore of the river, and was quite shaken up by the situation.  It’s not too difficult to see that the dog clearly knows something is wrong, and is missing it’s human mom, badly.