Dew is a yellow Lab. He lives in Kentucky. And though he loves his family and his home on a 70-acre farm, he does enjoy a bit of roaming. So much so, that a collective 10,000 people follow his adventures on Facebook and Twitter.

Dew enjoys a good adventure so much, in fact, that his family — who microchipped him and outfitted his collar with GPS — also added a tag that reads, “My name is Dew. I am not lost. I like to roam. Tell me to go home.” 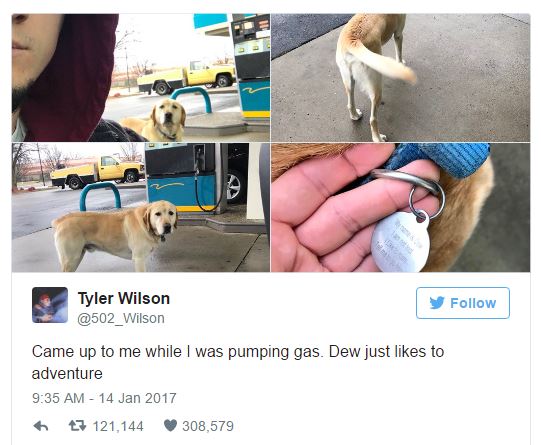 Earlier this month, Dew made a new friend at a local gas station. And Twitter user Tyler Wilson told his followers about it. It went viral, with more than 300,000 likes.

Dew’s family told BuzzFeed that their dog has many favorite places to hang — including the local school and fire station. Everyone loves him. It’s easy to see why, of course.

Dew even does his best to make people feel better. He recently happened upon a woman going through a rough time. A post on Dew’s Adventures Facebook page says:

“One touching story of Dew’s is a lady called us saying Dew was at her house. She lived 2 streets over. She was on her porch crying and really going thru a hard time. Dew had come up on her porch and consoled her. We told her we would come get him if he was bothering her. She said no he was her angel that night and she would tell him to go home when she went in side. He is such a loving dog…”

Those concerned for Dew need not worry says his owner, Mandey Lee. He doesn’t go far and “is home every night, and does not miss a meal.”