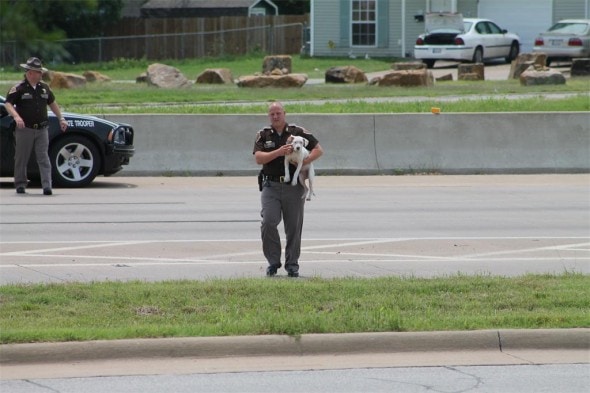 Troopers with the Oklahoma Highway Patrol stopped traffic on a busy highway Wednesday to save the life of a puppy.

Around lunchtime on Wednesday troopers spotted a puppy near the wall on I-44 near the Memorial exit. Captain George Brown and Trooper Eddie Weilert were concerned that the puppy was going to be hit by a car so they decided to block traffic and rescue her.

Captain Brown blocked traffic while Trooper Weilert walked toward the puppy to help her. Weilert said the puppy was scared and not moving as he approached her.  When Weilert put his hand down for her to sniff she licked it and then jumped into his arms.

The puppy will be kept on a three-day hold for an owner to claim her. If no one comes forward she will be available for adoption on Monday.

9 thoughts on “Highway Patrol Troopers Stop Traffic to Save Puppy”