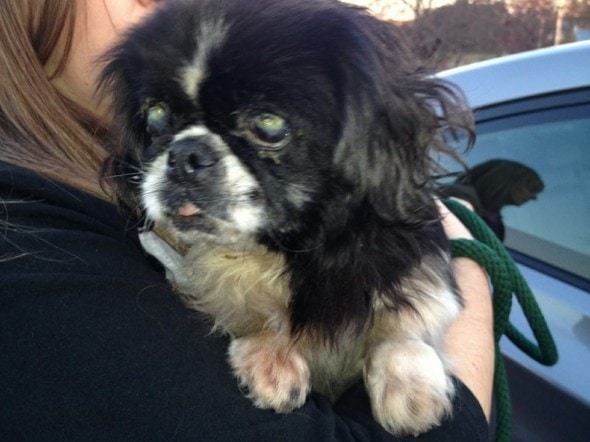 A small dog is getting the care she needs after being abandoned in a dead tree trunk. The dog was rescued over the weekend when a hiker spotted her and called for help.

On Saturday afternoon a hiker was not far from the Manchester Animal Shelter in New Hampshire when he spotted the dog abandoned in the dead tree. Unable to reach the dog by himself he called the shelter for help.

Volunteers went to check and found a cold, frightened dog inside the tree sitting on a pet car seat.

“She looked dehydrated,” said shelter manager Shelley Greenglass. “She was in shock. Her eyes were totally glazed over and she was very scared.”

The dog was rushed to the nearby emergency veterinary center where she was treated for ear and eye infections. The dog happily ate any food that was given to her.

The dog is believed to be about 8-years-old and has been named Angel by the shelters. The shelter is continuing to treat her and get her healthy. She is currently staying in a foster home and will be available for adoption after a seven day hold.

“Because she was abandoned, we have to hold her for seven days while attempts are made to find an owner,” said Stein. “After that, anyone interested in adopting her can contact the shelter and begin the process.”

“They just left her for the cold or some animal to get her,” said Greenglass. “She would have just stayed there and starved to death. It was almost like the dog might have been just staying there, waiting for them to come back.”

The shelter says they have the necessary food and medication to care for Angel, but donations are always welcome. If anyone knows anything about Angel or would like to make a donation please visit their website for information on how to donate and contact them.

3 thoughts on “Hiker Finds Abandoned Dog in a Tree”