Historian: Tale of Greyfriars Bobby is a Scam

According to historian Jan Bondeson, the tale of the most faithful dog in the world was nothing but a marketing ploy to attract tourists.

Featured in a 1961 Disney film,  the 140-year-old story of Greyfriars Bobby is compelling: according to legend, the faithful dog kept a 14-year vigil at his master’s gravesite in Edinburgh, Scotland. Tourists from the world over visit the statue commemorating his loyalty to this day, and his tale is often quoted as the ultimate example of dog loyalty. 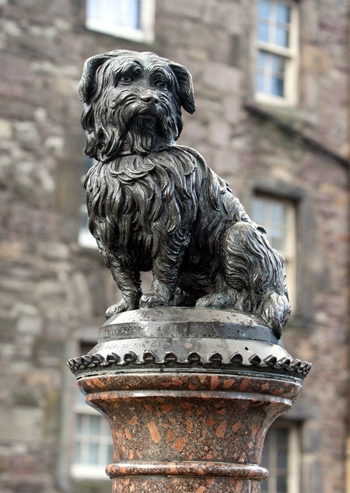 But Bondeson says it’s all a crock. The Cardiff University lecturer says the story was a total fabrication, dreamed up by cemetery curator James Brown, and restaurant owner John Traill. The men were looking to increase local business traffic and derived the tale to draw visitors from afar.

“The entire story is wrong – the account of the dog on the drinking fountain who supposedly kept vigil at his master’s grave in all kinds of weather is not accurate. Bobby would go out hunting rats in the church and was kept well fed by the locals. He was not a mourning dog at all – he was a happy little dog,” Bondeson told Reuters.

Bondeson was doing research for a book about the famous dog and studying drawings of Bobby when it occurred to him that he was looking at two different canines. “I noticed that the two dogs looked quite different. The first Bobby was quite an ugly dog but in later paintings he looks just like the statue on the drinking fountain,” Bondeson said.

According to Bondeson the first Bobby died in 1867, creating a conflict for Brown and Traill: “A dead bobby was no good for business, so they replaced him with a pure-bred Skye terrier who lived for a further five years until 1872 – after which it time did not take long for the fountain to be erected,” said Bondeson.