When a homeless man in Santiago, Chile, passed away over a cold night, he had no one to mourn his death but his loyal dog.

On Sept. 11, 2015, local news channel T13 broke the news of a homeless man found dead in the La Vega neighborhood. When authorities arrived to collect the body, the dead man’s dog was sitting next to him as if waiting for a miracle. 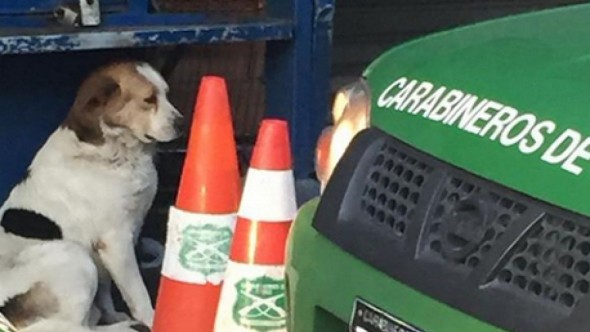 The man, who suffered from alcoholism was known in the neighborhood for doing odd jobs here and there whenever he wasn’t under the influence. Witnesses say that aside from the drinking problem, the homeless man was a good man and loved his dog.

Sadly, the miracle the dog hoped for never happened. His owner and best friend is gone and the dog continues to live on the streets.

Stray dogs are very common in Chile, and while communities look after street dogs and rescue organizations help as many pets as possible, the large number of abandoned dogs in the country is almost unmanageable.

Magaly Cortes Vera says this lonely dog is not the only stray in the neighborhood. Even though he might not have an owner now, he is surrounded by loving individuals who care for him and feed him on a daily basis.

“The dog is currently with our pack,” commented Cortes Vera on Facebook. “We will care for him as we have in the past. He knows where there is food and water and eventually he will go back with Jhonny, Wara, Felix, Pastora, Chola and the others.”

It’s good to know caring individuals are caring for this man’s dog.