Bill Feldman is a Navy veteran from Denver, Colorado.  He has come up with a great way to assist people in holding on to their dog’s leash.  Something he knows can be a problem.

“Three years ago when I adopted Henry, he pulled the leash out of my hand almost every day.  Every single dog walk with Henry was terrifying.  I almost lost the poor guy on a few occasions,” said Feldman.

Not wanting to wrap the leash around his wrist, potentially cutting off circulation or injuring himself or his dog, Feldman put his Navy experience to good use.

“I took a sailing glove, I’ve done quite a bit of sailing, and I sewed a snap shackle to a glove.  That glove evolved into a wristband,” he said.

Feldman is calling his new invention the “Liberty Wristband.”  Now he’s asking other dog lovers to help support his idea.  He’s set up a crowd-funding opportunity on Indiegogo.  If you’d like to see the page or to donate, you can click here.

Feldman says that the Liberty Wristband isn’t just for professional dog walkers.  He also hopes that it can help people with disabilities to be able to take more walks with their dogs.

“For veterans and for people with disabilities who just wanted to go on a walk with their dog,” said Feldman.

Feldman has a lot riding on his invention.  The high cost of production and not a ton of sales over the years have made Feldman homeless.  He was invited to apply for the ABC television show “Shark Tank,” where he would be able to pitch his project to some very successful business people.  However, anyone that’s seen that show knows how tough it can be.

“It is intense for one person.  And that has a lot to do with the predicament that I’m in right now.  But there’s no shame in it.  I believe in putting all your eggs in one basket if the goal shows some promise,” he said.

Hopefully, Feldman can get the help he needs through his Indiegogo page.  Once again, to donate or to order a Liberty Wristband, you can go to www.indiegogo.com and search for the “Liberty Wristband,” or simply click here. 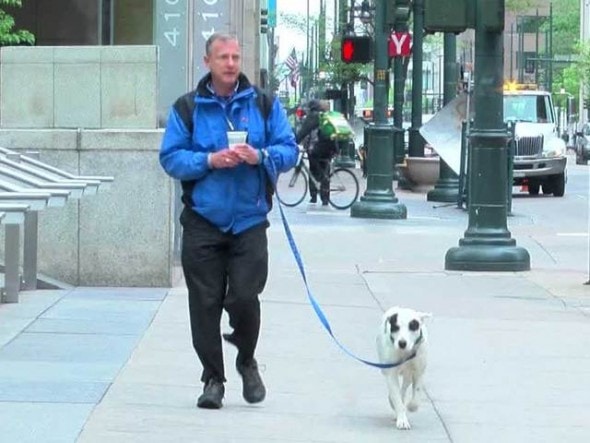