One would be hard-pressed not to notice Barley.  He’s the cute doggy face that has been following shoppers around East London’s Westfield Stratford mall.  It’s all in an effort by OgilvyOne that they are calling “Looking For You,” and its aim is to remind people that they are many good rescue dogs available at Battersea Dogs and Cats Home.

“Battersea rehomes animals all over the U.K. and beyond, and this could help encourage people to choose to rescue a dog,” says Carly Whyborn, head of operations at Battersea.  “We’re using innovative technology in a way that has never been seen before, and we hope more of our abandoned animals find loving homes because of it.”

An advertisement that gets handed out to shoppers as they enter the mall contains the secret to how it all works.  A chip that’s concealed in the ad triggers Barley to show up on digital display boards throughout the mall as you walk through.

Along with OgilvyOne, Framestore, RFIDiom and Exterion Media were all brought in on the project to find dogs and cats homes.  The idea came from a campaign last year that was called “The Magic of Flying.”  (You can click on the title for more information on that campaign.)

This time around, no one is attempting to sell seats on an airline.  It’s all about getting good, forever homes for these wonderful and deserving pets.  And by the way, Barley does have a new forever home thanks to the campaign, but Battersea reminds us all that their job is never really done. 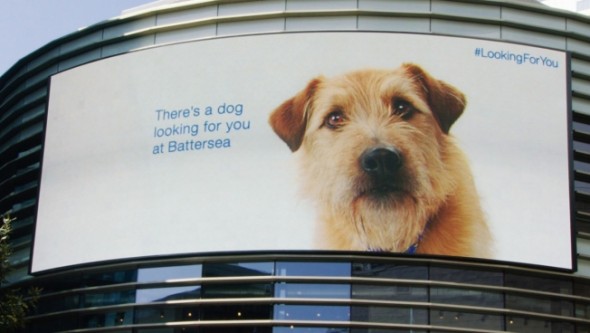