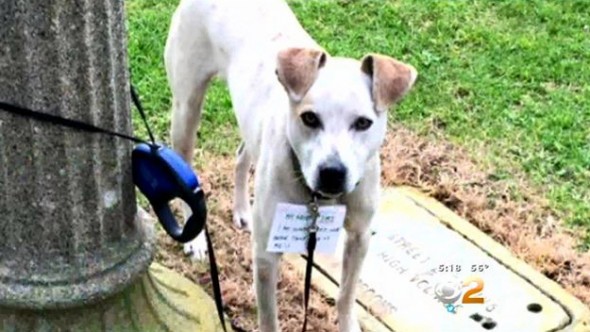 A woman who found a dog running loose in Point Fermin Park in San Pedro, California wound up walking the dog three miles in a rain storm to get the poor guy to an animal shelter.  There, at very least, he would be dry and not wandering the dangerous streets at night all alone.

Joey is a one-year-old pointer mix.  When Lisa Snyder, his rescuer, came across him in the park, he was beside himself.  He still had his collar on, and a bit of leash was still attached to the collar.  It seemed that his former owners tied him up to a light post in the park, and pinned a note to him with the following on it: “My name is Joey.  I am looking for a home.  Please take care of me!”

Lisa is an animal lover, so she took the time to try and wrangle the young dog in and comfort him a bit.

“He was scared. He was snapping. And growling. And trying to get away from people. He was just scared,” said Lisa.

After getting him calmed down a bit, and gaining a bit of his trust, Lisa decided to do what just about any animal lover would do.  She did as she was asked by the note affixed to Joey.

Lisa would most likely have kept Joey if she could.  Joey may have been newly made homeless, but Lisa has been living out of a van with her three rescue cats for a while now.  Unfortunately, her cats do not at all care for dogs being around.

After giving things some thought, Lisa decided she would make the trip down to the closest animal shelter to where she stays.  It’s about three miles away, and the weather wasn’t exactly ideal.  Never the less, Lisa and Joey made their way to Harbor Animal Care Center, stopping only once to try and get out of the rain for a minute.

According to news reports, San Pedro was experiencing outside temperatures around 40 degrees Fahrenheit.  That chilly temperature coupled with the rain made for a long walk, but she kept on going, and made it there.

“So, I got to thinking, ‘If I had left him out here with all that wind coming off the bluff and all that pouring rain and no shelter over there at all, he would have ended up sick, maybe dead,’ ” said Lisa.

Once Joey was brought in to the animal care center, he was scanned for a microchip.  He did have one actually, and it apparently contained accurate information.  Joey’s former owners were contacted by shelter staff to advise them of the ten day window they had to come and claim Joey.

Joey will be put up for adoption as of March 13.  Lisa is just hopeful that someone does adopt him, and that he is given the best life a dog could possibly conceive.

“I hope he finds a good family. A forever home. He needs one. He deserves one. He’s a good dog,” said Lisa.

Maybe it’s because she’s an animal lover, maybe she’s just a kind person.  It could also be the fact that she knows how difficult a life out on the streets can be, and didn’t want to see someone else suffer the same way.  Regardless of her reasoning behind it, she’s a hero in our book!  Way to go Lisa!